Who burnt the truck? Venezuelan FM says ‘false flag expert’ Pompeo should look among his ‘agents’ 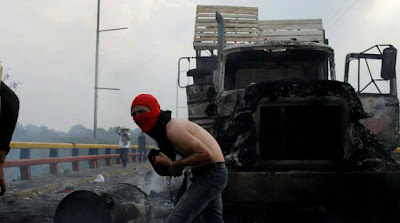 Venezuelan Foreign Minister Jorge Arreaza has challenged US Secretary of State Mike Pompeo amid border clashes over US aid. He lashed at Pompeo and his 'hitmen' saying they were searching for the pretext for war.

"The CIA expert in false flag operations, Pompeo, thinks he can fool the world with a truck set ablaze by his own agents in Colombia," Arreaza tweeted on Saturday in response to recent clashes along the Venezuelan-Colombian border.

The opposition-led attempt to drive trucks from Colombia into Venezuela carrying what they say was humanitarian supplies provided by USAID sparked tensions and clashes with police. The Venezuelan government refused to let the trucks through, denouncing the operation as a PR stunt and warning that the vehicles may be loaded with weapons.

The standoff at the Francisco de Paula Santander Bridge near the Venezuelan city of Urena ended with one of the trucks being burnt out. It is still not clear who was responsible for setting the truck ablaze.

In his tweet, Minister Arreaza posted several photos which appear to show the burnt truck on the Colombian side of the bridge, where it was set on fire after failing to cross the border. 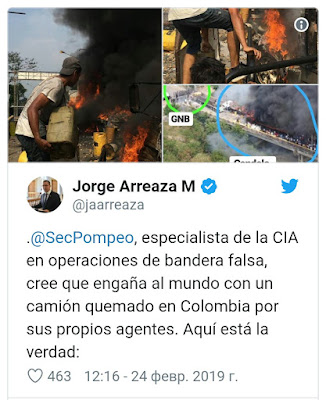 "If you want to find those who burnt the truck with fake humanitarian aid, look among your own employees," Arreaza wrote.

Pompeo and his hitmen are desperately searching for a pretext for war.

Mike Pompeo, who previously led the CIA, had earlier denounced Venezuela’s refusal to let the trucks in. Calling the nation’s President Nicolas Maduro a "sick tyrant," he vowed to "take action" against authorities who "oppose the peaceful restoration of democracy."

Washington, along with its allies in South America and the EU, is openly backing the leader of Venezuela’s opposition, Juan Guaido, who declared himself 'interim president' last month. Current leader Maduro dismissed the move as illegitimate and accused the US of attempting to oust him. Nations like China, Russia, Iran and Mexico continue to recognize Maduro as the ruler of the country. 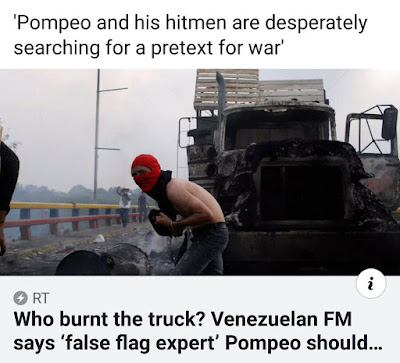