She added: ‘If your house is on fire then that does require some level of panic. You don’t sit talking about insurance claims and rebuilding – you do everything you can to put out the fire.” 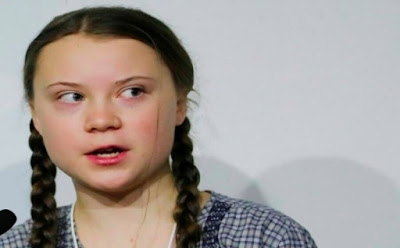 Britain’s most high-profile politicians rushed back from their holidays yesterday to be photographed alongside the 16-year-old environmental activist who took the House of Commons “by storm”.

MPs including John Bercow, Jeremy Corbyn and Ed Miliband welcomed Greta Thunberg to Parliament, where she made a speech about climate change and got a rapturous round of applause.


Greta told a packed room in the Palace of Westminster that her future and those of her fellow children had been “sold”, so that a small number of people can make unimaginable amounts of money.
“We probably don’t even have a future any more”, she said.
“It was stolen from us every time you said “the sky is the limit” and “you only live once”.”
The schoolgirl said she knew politicians did not want to listen, as she started to experience microphone problems.
She asked: “Is this microphone on? Can anybody hear me? Is my English OK? I am starting to wonder.”
Environment Secretary Michael Gove assured Miss Thunberg she had been heard as he admitted “we have not done nearly enough”.
MPs stood and clapped the youngster after she told them they didn’t want to listen.
Jeremy Corbyn tweeted: “It was a pleasure welcoming UK youth climate strikers and Greta Thunberg to parliament.”
“Young people will be the most affected by climate change – seeing them take charge of their future is inspiring. Labour’s committed to working with young people campaigning to save our planet.”
Speaking at an event in London on Monday, Greta called on the UK to hold a general strike over climate change.
She then told Radio 4’s Today programme on Tuesday that there needs to be “a level of panic” over climate change.
She added: ‘If your house is on fire then that does require some level of panic. You don’t sit talking about insurance claims and rebuilding – you do everything you can to put out the fire.”
Six months ago, the then-unknown Miss Thunberg camped outside Sweden’s parliament next to a hand-written sign that read ‘Skolstrejk för Klimatet’ (School strike for the climate).
She skipped school every Friday to sit on the steps of the Swedish Parliament and soon became a “global success”.
https://voiceofeurope.com/2019/04/swedish-climate-change-activist-greta-thunberg-calls-for-panic-and-a-general-strike-in-the-uk/