'我們沒有將來’: 16歲的Greta Thunberg 一向提供拯救方法,現在卻準備我們面對末日
‘We don’t have a future’: Greta Thunberg used to offer salvation, now she prepares us for doomsday
April 25, 2019 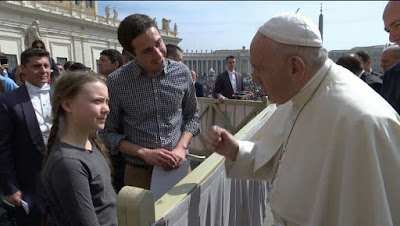 The maiden of environmental activism is beginning to sound like an apocalyptic cult leader. Will anyone be brave enough to challenge Greta Thunberg’s cataclysmic visions – and start a sane conversation about the environment?
The teenager’s latest stop on the celebrity mortification tour – it recently included a one-to-one with the Pope – was the UK parliament, where she delivered her now-familiar public shaming.
Only where once she spoke of deadlines, however unrealistic, there was an almost cathartic reveling now in the inevitability of the coming End of Days (“You did not act in time”).
“We had everything we could ever wish for and yet now we may have nothing. Now we probably don’t even have a future anymore,” said Thunberg in that earnest monotone.
“You lied to us. You gave us false hope. You told us that the future was something to look forward to. And the saddest thing is that most children are not even aware of the fate that awaits us.”
Thunberg giving a speech in the House of Commons. ©  REUTERS/TOBY MELVILLE
Now, if I had been an MP I would have probably been less than swayed by the presumption of guilt and the emotional blackmail by someone who was born in 2003 and became famous by organizing a school strike.
Yet no one dared raise a single objection. Instead she was praised fulsomely like a precocious child queen sitting on her throne for the first time.
Read more
I am terrified of ‘children’s crusader’ Greta Thunberg – and you should be too
Perhaps the MPs were just interested in her solutions.
“Many people say that we don’t have any solutions to the climate crisis. And they are right,” said Thunberg.
Policies?
“I am always offered help to write about the specific climate policies in specific countries. But that is not really necessary.”
There is only one.
“The ‘lowering of emissions’ is of course necessary but it is only the beginning of a fast process that must lead to a stop within a couple of decades, or less. And by ‘stop’ I mean net zero – and then quickly on to negative figures.”
To achieve that within her timeframe the world must abandon all petrol cars, all planes and ships, all meat, all computers, or 24-hour electric lighting or hot water.
Imagine for a second Thunberg’s speeches persuaded two billion Indians and Chinese to return from new-found prosperity to an existence that throws them not decades but millennia back – will we be saved?
Maybe not.
“Avoiding climate breakdown will require cathedral thinking. We must lay the foundation while we may not know exactly how to build the ceiling.”
Yes, we must simply destroy all modern civilization, and then hunker down in our unlit hutches through the Scandinavian winter – no way to make a living there carbon neutral or otherwise – and wait. Perhaps we should also build a literal cathedral and just pray for salvation instead.
This is not public policy. This is exactly what cults do when they are readying for that magical date to shoot yourself in the head and travel to the safe planet near Sirius.Even the medieval Christians at their plague-infested desperate worst didn’t shut themselves in preparing for the Rapture, so Thunberg knows that this is a hard sell.
And she doesn’t have much time. She has called for a general strike to paralyze all economic activity. With green parties still not in the majority anywhere in the world, and judging by her support of Extinction Rebellion, she believes that the path to power is through the streets. One wonders what will happen under Thunberg to the decadent dissenters who do not believe the prophecy.
Of course, imagine if you were Thunberg, and you were blessed with a vision. You knew how the world would end, if only a specific thing was not done. To her this is the only thing that makes sense.
To everyone else – this is literal delusion. Next time you blithely agree with her predictions as you bemoan the state of the world, think – is this what you really believe? Is a complete collapse of society, orderly, or likely like every other battle for dwindling resources, bloody and chaotic, what you really want?
If not, why is this person speaking to parliament and not on a street corner with a Bible quote on a sandwich board? While the rest of us have a more realistic and evidence-based discussion of the impact of any decisions that we will take – and we definitely need to take some.
Thunberg receives applause for her speech on Tuesday. ©  REUTERS/TOBY MELVILLE
Actually for once, after Thunberg’s speech I was relieved that our politicians are such an insincere and lily-livered lot.
They will agree with her on every word, stand next to her in all the photos, write vague promises to turn her words into reality sometime in the future, but when the moment comes to unload the revolver into your temple, they will have secretly slipped out.
But maybe it’s better to not wait that long, and raise your hand now and “What if we don’t want to commit suicide today for the sake of your fantasy afterlife tomorrow?”