醒未?: 美國務卿在視頻上承認美國政府提供完整訓練“說謊、欺騙和偷取”，而主流媒體無視
Secretary of State Admits on Video the US Gov’t Trains to “Lie, Cheat, and Steal” and MSM Ignores It
APRIL 25, 2019 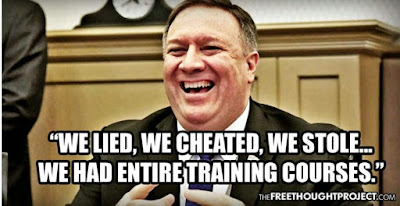 To those paying attention, the notion of the United States government lying, cheating, stealing, and even murdering, is not some far-fetched conspiracy theory, but rather a very genuinely disturbing reality. While the lying, cheating, and stealing is a common practice among all governments, admitting to it is not. Earlier this month, however, that all changed when the former Director of the CIA and current Secretary of State Mike Pompeo made a disturbing admission. Not surprisingly, his comments have gone completely — and likely deliberately so — under the radar of the mainstream media.

To most Americans, their government can do no wrong — unless it is the ‘other party,’ of course. But to those of us who see around the two-party distraction, whether the boot is on their left foot or right foot is of no consequence when that boot is on your neck. Hopefully, the following brutally honest statement from a man who was the CIA director under Barack Obama can help shake those still blinded by party politics out of their slumber.


“What’s the cadet motto at West Point? You will not lie, cheat, or steal, or tolerate those who do,” asserted Pompeo before making a most disturbing admission.
“I was the CIA director. We lied, we cheated, we stole. It’s — it was like — we had entire training courses,” he said to a room full of people at Texas A&M University who found the comments funny and then erupted into applause, adding “It reminds you of the glory of the American experiment.”

“I was the CIA Director; we lied, we cheated we stole. We had entire training courses.”
–@SecPompeopic.twitter.com/tehirq1cyX
— Jonathan Lalonde (@JonathanLalon12) April 19, 2019

But this is no laughing matter, and certainly nothing to cheer about. The CIA’s lies have led to the untimely deaths of countless innocent men, women and children. Their history of waging coups in countries unfriendly to their special corporate interests, like Iran, is savage, deceptive and murderous. Their lies have started wars and have served to slow the peaceful coexistence between different cultures around the globe.
For those who may be unaware, the plan to overthrow Iran has long been a mission of the CIA. In fact, in April 2012, Pulitzer Prize-winning journalist, Seymour Hersh reported that the U.S. Joint Special Operations Command had trained (Mojahedin-e Khalq) MEK operatives at a secret site in Nevada from 2005 to 2009. MEK is the Iranian political-militant organization that advocates for the violent overthrow of the current Iranian regime. They are hardly quiet about it.
According to Hersh, MEK members were trained in intercepting communications, cryptography, weaponry and small unit tactics at the Nevada site until President Barack Obama took office in 2009. Hersh also reported additional names of former U.S. officials paid to speak in support of MEK, including former CIA directors James Woolsey and Porter Goss; New York City Mayor Rudolph Giuliani; former Vermont Governor Howard Dean; former Director of the Federal Bureau of Investigation Louis Freeh and former U.N. Ambassador John Bolton.
Coincidentally, MEK was classified as a terrorist organization by the United States and its allies—during this training period—until they suddenly removed them from the list in 2012.
Even FBI agents who were tasked with investigating Osama bin Laden prior to 9/11 have come forward with damning accusations against the CIA. As TFTPreported, members of the FBI claimed that the CIA deliberately blockedthem from informing their headquarters about future Al-Qaeda plotters present in the United States in 2000 and again in the summer of 2001, essentially allowing 9/11 to happen.
“I am sad and depressed about it,” said Mark Rossini, one of the FBI agents assigned to the task force.
“It is patently evident the [9/11] attacks did not need to happen and there has been no justice,” said Rossini.
“It’s horrible. We still don’t know what happened,” said Ali Soufan, another lead FBI agent assigned to a counterterrorism unit who was also kept in the dark about the movement of the future 9/11 hijackers.
In an interview, as Newsweek reports,Richard Clarke, a White House counterterrorism adviser during the Bill Clinton and George W. Bush administrations, explained that top CIA officials, including director George Tenet, had withheld crucial information from him about Al-Qaeda’s plotting and movements, including the arrival in the U.S. of future hijackers Khalid al-Mihdhar and Nawaf al-Hazmi.
The list of CIA lies that facilitated the deaths of innocent Americans is endless and they are brazen about celebrating this death. Despite their known role in the death of thousands of Americans on 9/11, Pompeo traveled to Saudi Arabia in 2017 to award Crown Prince Mohammed bin Nayef the George Tenet Medal in recognition of his “excellent intelligence performance, in the domain of counter-terrorism and his unbound contribution to realise world security and peace.”
As ZeroHedge points out, Pompeo himself has long accused WikiLeaks of being a “non-state hostile intelligence agency”, usually manipulated by Russia. Since Pompeo first made this claim as CIA Director in April 2017, countless major US news sources from NPR to CNN to the Washington Post have uncritically repeated the line, smearing Julian Assange and WikiLeaks as “Russian agents,” and more broadly using the narrative to stifle independent journalism and government whistleblowers.
Now, he’s essentially admitting that they train to carry out this deception to facilitate further lying, cheating, and stealing.
As Pompeo notes, they have “entire training courses” in how to lie, cheat, and steal and they think Americans are so asleep that he can just come right out and say it. Sadly, he appears to be correct — and the utter lack of coverage from mainstream media proves it.