紐約法官宣佈州擁有你的身體並能強逼你注射任何他們想要的東西
NY judge declares the State owns your body and can force you to be injected with anything they want
April 23, 2019 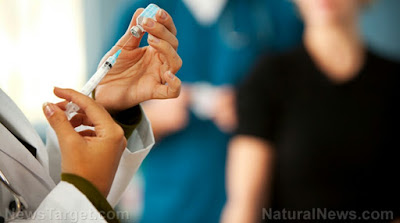 (Natural News) An increasing number of people from different religious and ethnic backgrounds have become skeptical about the merits of vaccinations in recent years. With more and more doctors and healthcare professionals warning about the dangers of vaccines – despite organizations like the World Health Organization and the Centers for Disease Control and Prevention insisting that they are 100 percent safe and totally effective – the blinkers have come off for many parents, who have subsequently made the decision not to vaccinate their children.

There are also many parents who for totally different reasons, including religious and ethical concerns, have made the unconventional decision not to allow their kids to be vaccinated. Some of these parents can be found among the Hasidic Jews who mostly live in New York City and other parts of New York state.

Many of the recent cases of measles diagnosed in the country have been centered among these communities, particularly in the Williamsburg and Borough Park suburbs of New York City. A group of parents who recently went to court to fight an emergency mandatory measles vaccination order issued by the state have lost their case, with Brooklyn’s Judge Lawrence Knipel insisting, “A fireman need not obtain the informed consent of the owner before extinguishing a house fire. Vaccination is known to extinguish the fire of contagion.” (Related: Modern-day vaccine mandates mirror human sacrifice rituals practiced throughout human history to protect and empower society’s elite class.)

“The fire of contagion”

Residents in the Williamsburg and Borough Park areas have been subjected to relentless pressure since the state announced emergency mandates forcing children to receive the controversial Mumps, Measles and Rubella (MMR) vaccine. This, after the diagnosis of 359 cases of measles in New York, mostly patients who live in ultra-Orthodox Jewish communities in Brooklyn.

Parents who refuse to allow their children to be vaccinated face stiff fines of $1,000, or as much as $2,000 if they do not appear at court hearings or respond to a legal summons.

Parents who decided to stand up against these forced vaccinations were quickly shot down in court. The Jewish Press reported:

In their petition to block health officials from enforcing the vaccination order, the five anonymous parents from the heavily chassidic neighborhoods claim they have a right to send their children to school without vaccinating because of the state’s “religious exemption,” that the current uptick in measles infection falls short of an epidemic, that the required three-in-one MMR (measles-mumps-rubella) vaccine subjects their families to additional risks, and that less drastic steps – such as quarantining those infected – could have been taken instead.

The judge, however, disagreed with the parents’ position, as noted in his verdict:
The unvarnished truth is that these diagnoses represent the most significant spike in incidence of measles in the United States in many years and the Williamsburg section of Brooklyn is at its epicenter.

Health Commissioner Oxiris Barbot noted that since measles has a long incubation period, officials expect the “epidemic” to get worse before it gets better. Nonetheless, he was proud to report that 500 kids under the age of five have been forcibly vaccinated since the vaccine mandate was announced.

Interestingly, while the media continues to fan the flames of measles hysteria and hundreds of children have been diagnosed with this illness, there have been no reports of deaths or serious complications among these many “victims.” Which raises the question: Do health authorities really have the right to trample on the health freedoms of individuals just to stop the spread of a relatively harmless disease? And in doing so, what doors have they opened to other future violations?