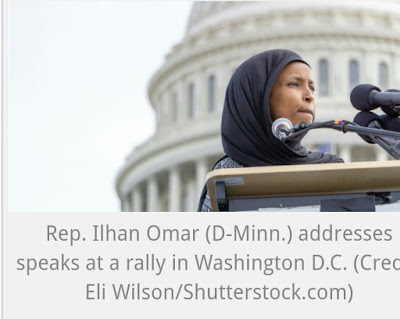 Rep. Ilhan Omar’s  (D-Minn.) history of egregious antisemitic remarks and dismissal of the Islamist 9-11 attacks as “some people who did something” pale in comparison to her most recent comment which, in a subtle but horrific manner, threatens all of Judeo-Christian Western society.

Omar retweeted a New York Times op-ed by Eric V. Copage, which claimed that “Jesus, born in Bethlehem, was most likely a Palestinian man with dark skin.”

“As I grew older, I learned that the fair-skinned, blue-eyed depiction of Jesus has for centuries adorned stained glass windows and altars in churches throughout the United States and Europe,” Copage, who is Black, wrote. “But Jesus, born in Bethlehem, was most likely a Palestinian man with dark skin.”

Although the article was about the historical accuracy of Jesus’ depicted ethnicity (particularly in relation to Church art), white versus person-of-color, this one reference to Jesus’ national allegiance became the focus of media debate. At face value, the claim that Jesus was a Palestinian is anachronistic. Palestinian, as a national identity, has never existed. And Jesus was, by all accounts, a Judean who worshipped the God of Israel.

The claim that Jesus was a person of color is not necessarily accurate. According to Christian tradition, Jesus was descended from the House of David who was the offspring of Ruth the Moabite. Moabites, as the descendants of the crimson Esau, were reportedly red-haired and light-skinned.

Not all indigenous Middle-Easterners, or even all Palestinians, are universally olive-skinned. Ahed Tamimi, who was incarcerated for hitting an IDF soldier, was dubbed “Shirley Temper” for her resemblance to the child actress Shirley Temple who had long blond curls.


In any case, the author’s contention that Jesus was a Palestinian seems absurdly anachronistic when taken at face value. This out-of-time aspect was succinctly explained by The Daily Wire. 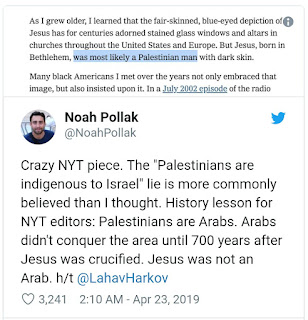 It seems even more absurd that Ilhan Omar, who is neither a Palestinian nor a Christian, should espouse this theory. It could be that Jesus’ Palestinian identity has been incorporated into theDemocratic Party platform.
Reverend William Barber II stated as much in his address to the 2016 Democratic National Convention that was described by the media as “rousing and was well-received.” Rev. Barber referred to Jesus as a “brown-skinned Palestinian Jew.”
If that is the case, then the DNC and Rep. Omar have adopted the credo of Yasser Arafat’s adviser Hanan Ashrawi, a Christian, who said in an interview to the Washington Jewish Week on February 22, 2001, that “Jesus was a Palestinian.”
This became the official PLO platform as evidenced by their frequent reference to Jesus as “the first Palestinian martyr” and whose annual Christmas statement reads, “Every Christmas, Palestine celebrates the birth of one of its own: Jesus.”
Dr. Mordechai Kedar, a senior lecturer in the Department of Arabic at Bar-Ilan University, unpacked Omar’s motives, explaining that they had even greater implications than a simple disagreement over Jesus’ identity.
“Omar is stating that Jesus was Palestinian because he was born in Palestine,” Dr. Kedar told Breaking Israel News. “She believes this to be true for anyone and at any point in history since Palestine has existed since the creation of the world. Therefore, any person who has ever lived here, including all the people described in the Bible and the New Testament, were Palestinians.”
Dr. Kedar called this perception “re-engineered history,” a technique he claims is inherent in Islam and the Arab world, hence, a world-view espoused by Rep. Omar. Although the op-ed re-tweeted by Rep. Omar was a commentary on race, the reference to Jesus’ Palestinian identity resonated so strongly with Muslims that it was reposted in its entirety in The Muslim Times.
“According to their agenda, Palestinian, Arab, and Muslim, all of them are in agreement about their message that all of world history is the story of Islam,” Dr. Kedar said.
Dr. Kedar noted that Islam espouses the methodology of the Nazi propaganda master, Joseph Goebbels who said, “If you tell a lie big enough and keep repeating it, people will eventually come to believe it.” Perhaps, even more disturbing, is the second half of Goebbels credo which states, “It thus becomes vitally important for the State to use all of its powers to repress dissent, for the truth is the mortal enemy of the lie, and thus by extension, the truth is the greatest enemy of the State.”
“They can re-engineer history for any country, for any people, for any part of history that is not consistent with the Islamic narrative. Muslims who live in America believe that America is an Islamic country with an Islamic history and therefore they belong there, have a greater right to the country and ruling it, than anyone else.”
This seemed to be hinted at in former-President Barack Obama’s address to the Islamic Society of Baltimore inside their mosque in 2016 when he said, “Here’s another fact, Islam has always been part of America.”
Kedar explained how non-Muslims are perceived in Islam.
“Anyone who is monotheistic, anyone throughout history who was monotheistic, is a Muslim,” explained Dr. Kedar. “Even if he considers himself a Jew or a Christian, according to Islam, he is a Muslim by definition.”
Although the Islamic usurping of history is not the official policy of any political party in the U.S., it is the official platform of the Islamic Party of Ontario, a newly registered political party in Canada. Its list of principles includes instating Sharia law and instituting a constitution and principles are based solely on Islamic teachings. Yet in a rather perplexing manner, the party aligns with the left-wing politically correct culture. It promotes homosexual issues while arguing against gender identity calling it “liberal fascism.” This stands in stark contrast to the policies of many Muslim majority nations which follow Islamic law in applying capital punishment to homosexuals.
The party also advocates for universal healthcare and other more socialized government policies described as a “worker partnership economy.”
More in holding with their Muslim beliefs, the party calls for criminalizing the consumption of alcohol and marijuana, acts of adultery, and gambling.
Most perplexing to Canadian voters is the party’s claim “that Islam is the native DEEN (fundamental principle) of Ontario and Canada.
Islamic parties have already entered European governments, with representatives in the parliaments of Sweden and Belgium.
“Ilhan Omar is faithfully representing the Islamic discourse,” Kedar said. “She is not concealing anything. But people are working hard to avoid admitting the simple meaning of her words.” 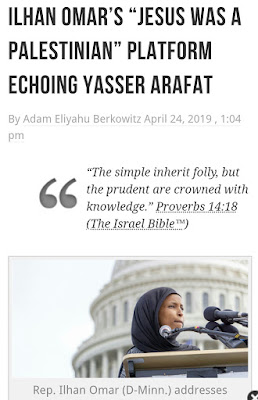