The Essence of Evil: Sex With Children Has Become Big Business in America 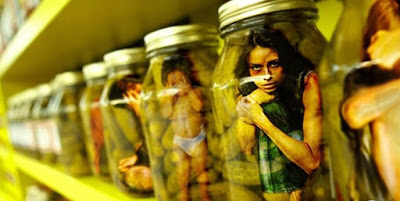 (RI) — Children, young girls – some as young as 9 years old – are being bought and sold for sex in America. The average age for a young woman being sold for sex is now 13 years old.


This is America’s dirty little secret.
Sex trafficking—especially when it comes to the buying and selling of young girls—has become big business in America, the fastest growing business in organized crime and the second most-lucrative commodity traded illegally after drugs and guns.
As investigative journalist Amy Fine Collins notes, “It’s become more lucrative and much safer to sell malleable teens than drugs or guns. A pound of heroin or an AK-47 can be retailed once, but a young girl can be sold 10 to 15 times a day—and a ‘righteous’ pimp confiscates 100 percent of her earnings.”
Consider this: every two minutes, a child is exploited in the sex industry.
According to USA Today, adults purchase children for sex at least 2.5 million times a year in the United States.
Who buys a child for sex? Otherwise ordinary men from all walks of life.
“They could be your co-worker, doctor, pastor or spouse,” writes journalist Tim Swarens, who spent more than a year investigating the sex trade in America.
In Georgia alone, it is estimated that 7,200 men (half of them in their 30s) seek to purchase sex with adolescent girls each month, averaging roughly 300 a day.
On average, a child might be raped by 6,000 men during a five-year period of servitude.
It is estimated that at least 100,000 children—girls and boys—are bought and sold for sex in the U.S. every year, with as many as 300,000 children in danger of being trafficked each year. Some of these children are forcefully abducted, others are runaways, and still others are sold into the system by relatives and acquaintances.

“Human trafficking—the commercial sexual exploitation of American children and women, via the Internet, strip clubs, escort services, or street prostitution—is on its way to becoming one of the worst crimes in the U.S.,” said prosecutor Krishna Patel.

This is an industry that revolves around cheap sex on the fly, with young girls and women who are sold to 50 men each day for $25 apiece, while their handlers make $150,000 to $200,000 per child each year.
This is not a problem found only in big cities.
It’s happening everywhere, right under our noses, in suburbs, cities and towns across the nation.
As Ernie Allen of the National Center for Missing and Exploited Children points out, “The only way not to find this in any American city is simply not to look for it.”
Don’t fool yourselves into believing that this is merely a concern for lower income communities or immigrants.
It’s not.
It is estimated that there are 100,000 to 150,000 under-aged child sex workers in the U.S. These girls aren’t volunteering to be sex slaves. They’re being lured—forced—trafficked into it. In most cases, they have no choice.
In order to avoid detection (in some cases aided and abetted by the police) and cater to male buyers’ demand for sex with different women, pimps and the gangs and crime syndicates they work for have turned sex trafficking into a highly mobile enterprise, with trafficked girls, boys and women constantly being moved from city to city, state to state, and country to country.
For instance, the Baltimore-Washington area, referred to as The Circuit, with its I-95 corridor dotted with rest stops, bus stations and truck stops, is a hub for the sex trade.
No doubt about it: this is a highly profitable, highly organized and highly sophisticated sex trafficking business that operates in towns large and small, raking in upwards of $9.5 billion a year in the U.S. alone by abducting and selling young girls for sex.
Every year, the girls being bought and sold gets younger and younger.
The average age of those being trafficked is 13. Yet as the head of a group that combats trafficking pointed out, “Let’s think about what average means. That means there are children younger than 13. That means 8-, 9-, 10-year-olds.“

“For every 10 women rescued, there are 50 to 100 more women who are brought in by the traffickers. Unfortunately, they’re not 18- or 20-year-olds anymore,” noted a 25-year-old victim of trafficking. “They’re minors as young as 13 who are being trafficked. They’re little girls.”

Where did this appetite for young girls come from?
Look around you.
Young girls have been sexualized for years now in music videos, on billboards, in television ads, and in clothing stores. Marketers have created a demand for young flesh and a ready supply of over-sexualized children.

This is what Bennett refers to as the “pornification of a generation.”