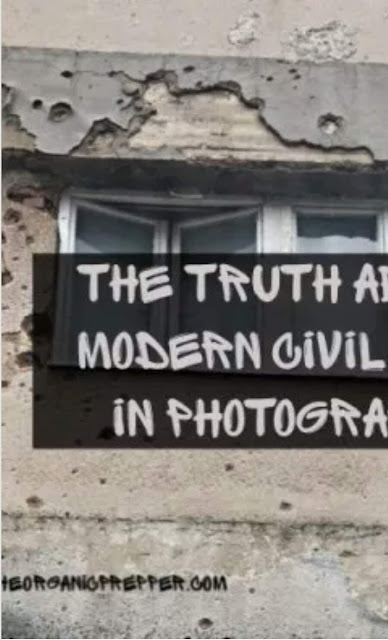 Many of us have suggested that the United States is on the verge of a civil war. Folks can’t get along. They’re divided to the point that they literally hate their neighbors based on the bumper sticker on the car from the last election.
Both “sides” seem to think that the other would be easily defeated. Both factions seem to be at a simmering point at which they believe violence has become warranted. Both factions believe they possess some power that would wipe out the other side in a matter of days. It reminds me of that scene from Gone with the Wind when Scarlett is at the barbecue and all the young men run away from the girls in their pretty dresses, confident that they’ll whoop some Yankee butt and be home in a week or two.
But it didn’t happen like that then and it wouldn’t happen like that now. Back in the days of Rhett and Scarlett, they had some cannons and some guns that were quite awkward compared to the weapons we have now. Back then, the homes were burned. But in a modern civil war with modern weapons, an American Civil War would be exponentially worse than the one in the 1860s.
I am currently spending about a month over in the Balkans doing some research and taking a survival course. (If you want to read about the trip, go here.) And what I’ve learned about modern civil war would hopefully make any rational human being think twice about it being a viable solution to our country’s problems.

Over the past couple of weeks, I have been through at least a dozen cities and small towns in Bosnia, and there is something I noticed that I didn’t expect. It is from this post more than all the others I’ve written about this trip that I believe we can learn the most.
Every single place I’ve been, from the south of this country to the north, has buildings that are scarred from the war. From large cities to

Save
tiny villages, no place seems to have been exempt from the damage.

There are bullet holes, bigger marks from shells, entire missing stories on homes and businesses, gouges from shrapnel. Some buildings have more damage than others but most buildings around during the war have some damage.
Selco has written about all this great detail in his book telling the stories of life in these times. (The book is also avaible in PDF format for only $5.49)
This article is loaded with photos and videos to document what I’ve seen. Imagine the terror of being in one of these buildings while this damage was being sustained. Then imagine living through this for years.
And while you were being shot at and shelled, you had no running water and no food, you had to defecate outside, you had no power of any kind, and your windows were blown out, and it was winter.

It truly can happen anywhere.

Nobody every thinks this kind of thing can happen anywhere that they live. But Bosnia has the scars to prove that indeed, it can. First, let me assure you that it’s a very modern country. People weren’t over here using outhouses and eating pigeons before the war. They followed the American fashions and television show. They are well-educated. There are a few cultural differences but it’s a misconception to believe that Bosnia was some kind of third-world country. They weren’t before the war and they aren’t now.
It used to all be one big country over here – Yugoslavia. There were years of division and other countries formed, but the language is basically the same in each country. If you speak, Croat, they’ll understand you in Bosnia, Serbia, Montenegro, and the rest of the Balkan countries.
During the Balkan War of the early 90s, people in the same cities were fighting one another and the whole thing is pretty complicated. I’m sure if I tried to explain it as per my understanding, numerous “experts” would pop up, ignore the whole point of the article, and spend half an hour proving me wrong. So for the sake of possibly avoiding said comments, let me just say, a few of the players were Croats, Bosniaks, Bosnians, and Serbs.  And people in the Balkan region deciding to kill other people in the Balkan region.
Civil war.
Ethnic cleansing.
Genocide.
Of course, the pot was stirred by politicians and the media – sound familiar? But that is a story for another article.

The damage on the buildings tells the story.

Save
The damage to the buildings is the stone version of scars on a human body. And behind every scar is a story.The scars tell of people under relentless attack. There was a constant incoming barrage of shells and rounds from sniper rifles.

Selco told me that something hit his house about every five minutes for a year. It became a thing that was no longer shocking, to have one’s windows blown out or holes put into their home.
The scars tell of the fact that nowhere was safe from enemies intent on genocide. The country homes are damaged just like the city homes.
So if you feel perfectly safe in your current location, you should know, in an all-out SHTF situation, no place is immune and nobody is exempt.
There are some smaller homes that were shielded from most of the sniper fire by larger homes, but that didn’t stop a shell from being lobbed onto the roof of those smaller homes. There wasn’t notably one town that was less damaged than other towns, at least not that I have seen.

People don’t talk about the war.

As I’ve written before, the people of Bosnia are warm and friendly. They want to feed you and introduce you to their delicious regional specialties like cevapi and local beer.


They do not talk about the war, aside from Selco, of course, but the marks of it are everywhere.
Every place I’ve been is deeply scarred.
Some buildings were so badly damaged they were abandoned, yet their skeletons remain, standing as a silent reminder. The bones of an old school. The bones of somebody’s home. A shop, an office building, a former apartment building that housed dozens.
Other buildings were damaged but are still in service, home to new generations who plugged the holes from a large caliber bullet on the inside to keep the draft out.
But from the outside, you can still see where enemy fire pierced that apartment before – and many times these bullets went in one side of the building and out the other side, leaving a matching exit wound, so Selco tells me. Anyone sitting in their home in the way of those rounds would not have survived. And of course, there was no way to know where such a shot would hit.
There was no place that was safe, not even in your own home. The video below shows what it was like during the Siege of Sarajevo and when you look at the pictures I’ve taken here you can see how lasting the damage has been. 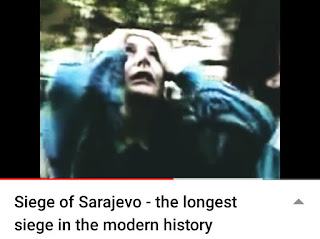 You can see some buildings pockmarked by what must have been a constant barrage. Other buildings only sustained a dozen hits or so. But it’s rare to find an older building that is unmarked. I don’t believe I’ve seen one.

Here’s how people lived during the war

And you see these buildings in the video below taken in Sarajevo during the war? These apartments without windows, with crumbling balconies, with gaping holes in the exterior walls where they took fire? People lived there still, in these broken buildings, because where else could they go? 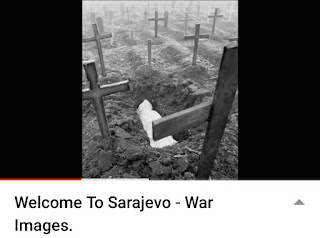 And there they lived in these buildings with no power, no running water, no place to go to the toilet, no windows, no food, no heat.
And that was the betteroption.

Save
In the streets, out in the open, it was even worse than being in buildings being constantly attacked, because then a person was a ripe target for the snipers who stationed themselves in the hills above Sarajevo and many other cities and towns in Bosnia.


A trip across an open space was a run for one’s life. A sprint. A question. Are you faster than a bullet?
It’s said that for the snipers, it was a game to shoot people just trying to go down the street and that they gambled and toyed with their victims like cats with mice, blowing off someone’s leg and then watching the victim drag themselves almost to safety. Almost.
Some of the snipers have been tried at the Hague as war criminals and found guilty. Others who committed evil, brutal acts are now in positions of power.
When I was walking with Selco he said, “This place was safe, but one step over there was not. We would hear volleys of 10-15 shots, then a pause. That’s when we ran to the next safe space. Sometimes the pause was a shooter reloading and sometimes it was not.” Even in his own garden, there were safe zones and danger zones within a foot of one another.

This was not just in big cities.

Save
Sure, the stuff we heard about on the news was the big cities. Sarajevo in particular.


But this was happening everywhere. Smaller cities had sniper posts above them too. Farms and country homes also came under fire.
The most important thing I’ve learned and that I want to share with you is that it’s a mistake to think that if you live in a town under a certain population that you will be “safe.” In a war, no place is safe. Buildings everywhere were devastated. People everywhere fell victim to genocide.
Enemy soldiers and snipers were intent on destroying the country and everyone in it, rural or urban. Resources were scarce and if people thought you had something they needed, they were coming for you.

The war is over but the scars remain.

After the war, survivors repaired broken buildings. They replaced windows. Some people tried to cover the marks that were made during the war. Others did not. It could be because of the money it costs to remove the signs of damage.
Or did they want to remind themselves of how quickly things can fall apart? How one day you can be walking to the market to get food for supper and then the next day, people are shooting at you and shelling your home?

It’s easy to say that nothing like this could ever happen in America, but when you’ve seen the remnants of that dark time, you realize that the people in Bosnia probably thought it could never happen there either.
You realize that one-day things are normal except for some loud-mouthed politicians fighting. There are a few protesters. There are people who disagree politically, but that’s as old as time, right?
Then the next day, you’re under siege because some of those loud-mouthed “leaders” persuaded people to take action. No one ever thinks, “Tomorrow, I will be a victim of an attempted ethnic cleansing. Tomorrow, a political movement will become violent and people will try to kill me, my neighbors, and everyone I love.”
And the people of Bosnia never thought they’d be under siege for years, either.
In each scar that remains in Bosnia, there is a story. And in each story, there is a lesson. 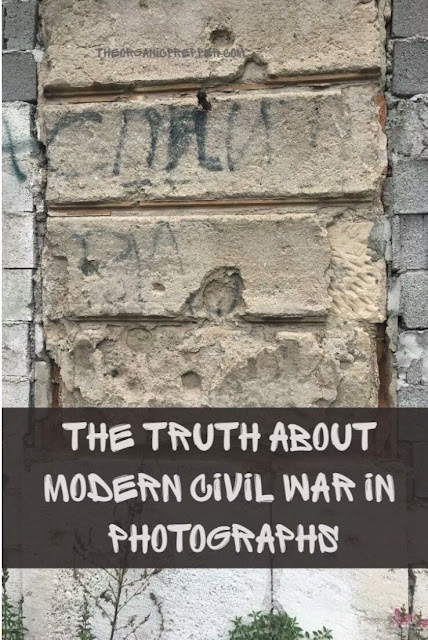