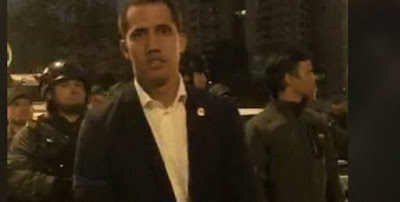 Self-declared Venezuelan ‘interim president’ Juan Guaido has called for a military uprising in a video shot at a Caracas airbase, accompanied by a number of soldiers and detained activist Leopoldo Lopez.

The moment has come to “start the end of the usurpation,” Guaido said in the video, flanked by heavily-armed soldiers and an armored vehicle. According to him, the speech was made at the Generalissimo Francisco de Miranda Air Base in Caracas, commonly known as ‘La Carlota’.
Guaido was filmed standing next to opposition politician Leopoldo Lopez who was arrested in 2014 and held under house arrest after he was found guilty of “inciting violence” during the anti-government riots. Lopez wrote on Twitter that he was “released by the military” on Tuesday under the orders of Guaido.
The three-minute video was shot ahead of a planned anti-government rally that day, in which Guaido said that the soldiers deployed to the streets would be acting to “protect Venezuela’s constitution.”
Guaido had earlier claimed on Twitter that he was meeting with “the key military units” of the Venezuelan army as “the beginning of the final phase of Operation Freedom.”
The army “had taken the right decision” to move out against President Nicolas Maduro, he wrote. He also called on Venezuelans to go out on the streets and help to “mobilize” the army against the government.
Defense Minister Vladimir Padrino Lopez, meanwhile, blasted Guaido’s move as “a coup with the aims to flood the country with violence.”
The army “stands firm in defense of the National Constitution and the legitimate authorities,” he said, adding that the military units all across Venezuela are staying at their bases and remain loyal to their commanders.
Around 50 countries globally, including the US, have recognized Guaido's 'interim presidency'. He has argued that Maduro's 2018 re-election was illegitimate, and in recent weeks has stepped up pressure on Maduro to step down. In response, Maduro's government has stripped Guaido of his parliamentary immunity and barred him from leaving the country.
Bolivian President Evo Morales decried the “coup”, writing on Twitter: “We strongly condemn the coup attempt in #Venezuela, by the right wing that is submissive to foreign interests.” President Maduro retweeted the note of support on Tuesday morning.
President Morales added: “The United States with its interference and promoting coups seeks to provoke violence and death in #Venezuela, it does not care about human losses, only its interests. We must be vigilant and united so that the coup plotters never return to our region.”
https://youtu.be/puyK9ZldB2g


Venezuela's Maduro says he has spoken with military leaders who ‘have shown him total loyalty’
https://www.rt.com/news/457913-venezuelas-maduro-military-loyal/