Russia for the first time publicly disputed that the Americans actually went to the Moon half a century ago, which, in fact, disputes a large part of the scientific community and over 20% of American citizens.

Roscosmos, the Russian space service chief and Russian Deputy Prime Minister Dmitry Rogozin, has just revealed that the work of a proposed Russian mission on the Moon will be to verify whether the Americans actually carried out the mission.

"We have this goal to fly and verify whether they went there or not," said Dmitry Rogozin, answering a question about whether the US sent astronauts to the moon.

About two out of ten respondents in various US polls in the twentieth century deny that the mission of Apollo 11 sent as those who claim that the famous admission was a well-earned body of Americans for televisions are rising.

The Apollo 11 mission was part of NASA's Apollo Program, its ultimate goal being to land people on the Moon. It happened as the media of the time broadcast.

The historical record:
The mission was launched by the Kennedy Space Center on July 16, 1969 at 13:32 UTC with a Saturn V rocket and a three-member crew consisting of Nel Armstrong, Baz Olndrin and Michael Collins. Shortly afterward, he entered the moon and after a three-day trip he orbited the Earth's satellite.

After a couple of moons around the Moon to find a suitable place to get in, Olldrin and Armstrong entered the Eagle and dropped out of the Columbia government vehicle where the third astronaut, Michael Collins, remained.

The descent of the moonlight, which lasted about 12 minutes, was difficult because of problems on the board computer, but also when it was found that the location chosen was not quite smooth. So Armstrong took control of the flight manually by selecting another spot on the spot.

Eventually the Aeton was appended to the Sea of ​​Peace at 20:17 UTC on July 20th. The first words that were transmitted from the surface of the Moon were Houston, Tranquility Base here. The Eagle has landed.

There were preparations for leaving the ship, which lasted about six hours. At 2:56 UTC on July 21, Nel Armstrong became the first person to step into the surface of a heavenly body, telling the famous words "That's a small step for man, one giant leap for mankind " a man, a giant leap for mankind " ), who had previously prepared for the occasion.

The first steps on the Moon were broadcasted live on Earth through a camera that existed outside the moonlight, and it is estimated that 500-700 million people watched them all over the world.

Armstrong was followed by Oldtrin, both of whom stayed on the moon's surface for about two and a half hours, setting up the US flag, taking about twenty pounds of soil, rock and dust samples, and putting equipment for scientific experiments (a seismograph and a laser reflector for measuring the distance of the Moon from the Earth).

After a few hours of rest for the astronauts, the moon's moon's part left the surface of the moon and met in orbit with the vehicle of the two, which passed. Then the moon was disconnected (would remain in orbit around the moon for a few months before crashing into its surface) and the three astronauts began the three-day trip of their return.

On the surface of the Moon, apart from the American flag and experiments, there was also a commemorative plaque (in the descent part of the selenacat), with the inscription Here Men From The Planet Earth First Set Foot On The Moon, July 1969 AD We Came in Peace For All Mankind (Here People On Planet Earth First On The Moon, July 1969 AD We Come In Peace For All Humanity), a depiction of the Earth and the signatures of the three astronauts and American President Richard Nixon.

Apollo 11 astronauts arrived in the Pacific Ocean, near the island of Weeck, on July 24, 1969.

However, human attachment provided food for a variety of theories, and many scientists were the ones who at first challenged the historicity of the event.

The controversy was also depicted in Hollywood with Capricom 1 in 1978. The subject of this film was the space mission for attachment.

In the movie, the takeoff took place normally but the landing was not on the Moon but in Nevada, in a studio where the alleged and advertised admission was filmed.

In February 2000, a new round of debates and controversies began after an hourly documentary from the US television network Fox TV titled: "Theories of Conspiracy: Are We Really Surpassed on the Moon?"
This particular network featured the "The X-Files" series and the show was presented by actress Mitch Pileti, the well-known AD Walter Skinner of X-Files.

This show featured interviews with people who believe that the 'Apollo' missions of the 1960s and 1970s were nothing more than a big state farce of the American Space and Aeronautics Company (NASA).

Listverse recorded the 10 key arguments of those who question the success of NASA's then venture.

When the astronauts set up the US flag, it seems to be waving, which is impossible, since there is no wind on the moon.

NASA's explanation: the flag is held open by a horizontal bar and simply moves when the astronauts unfold it and its vertical pole is fixed to the ground. The pole is very light, made of flexible aluminum, and so it continues to vibrate even after the astronauts have been removed, giving the illusion that it waves in the (non-existent) air.

In all the capture images and video, a crater is missing under the moon weighing 17 tons. It is the crater that the moon had to form with its descent.

NASA responded that the moon's soil is much harder and the surface on which the descent was rocky, leaving no visible signs of the business at this point.

The shadows in the photos are not completely dark as it should be because the only source of light is the Sun.

NASA's explanation:
So the moon is not the sun the only source of light but also the moon itself that reflects the sunlight. This is why the shadows are not completely dark.

Astronauts could not survive such a trip because of their exposure to hazardous radiation from the Van Allen belt.

NASA claims that the short time it took to cross the Apollo 11 Van Allen belt, coupled with the spacecraft's protection, meant that exposure of the astronauts to radiation was very low.

Van Allen belts consist of particles with a high electrical charge that are allegedly trapped by the Earth's magnetic field. Each zone of these is in the shape of a huge ring and one located inside the other. The strongest part of the inner zone is about 3,200 km from the ground.

Its origin is believed to be due to the radiant or radiant action of the Sun, while the existence of the outer band is thought to have solar and cosmic origin. The strongest area of ​​the second is about 16,000 km above Earth's Ecuador.

After the first photos were published, many people noticed a paradoxical object being reflected in the astronaut's diving. Supporters of our theory that we have never cried to the moon say that here we are dealing with a "spot" used in television and cinema studios.

NASA relies on the technology at the time, announcing that it is an ophthalmopathy due to the poor quality of photography.

If one plays fast the astronaut promenade, it looks as if it has been pulled to Earth and then played at slow speed during its "official" broadcast.

NASA refutes the above saying that the video was not slow-processing but it was from the beginning.

There was no abundance of star bulbs in the moon's dark skies when the astronauts recruited and walked.

What does NASA say?
The harvest took place during the lunar breakfast, with the sun shining sharply. NASA technicians have just set the exposure time for the cameras so that the exposure time of the film is too short to prevent too much light and blur the details of the shot. The stars, though visible from the astronaut's eyes on the moon, were not bright enough to be photographed.

8. The mysterious rock with the letter "C"

A photo with a perfectly symmetrical letter "C" on a rock gave food for new challenges.

NASA has taken responsibility for a technician who, according to the Americans, has added the letter with the help of technology "for plaque".

9. Traces of footwear in fine dust, despite the absence of moisture or atmosphere or strong gravity, are unexpectedly intense and well-preserved.

Lack of wind on the moon means that fingerprints are kept much better than on Earth, as dry lunar sand is not dispersed as easily as it would on our planet, says NASA.

10. The rocks of Antarctica

The rocks that the astronauts have collected are the same as those found in the Antarctic scientific missions.
In fact, some lunar rocks have been found on our planet, but they are all oxidized from their passage, as asteroids, through the Earth's atmosphere.

However, the fact that all six appointments were strangely occurred during Nixon's presidency is impressive. No other US or other country leader has ever been able to send people to the moon within the 40 years that have passed since. 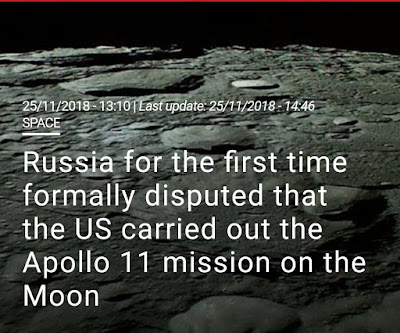