The Facts:A new study from YouGov and Cambridge University reveals some telling facts about people who believe in conspiracy theories. For example, 44% of people believe only a small group of people control government regardless of who's elected.

Reflect On:Are we waking up to the truths in our world, even though media, education and pop culture tells us we're crazy to think differently? Are we seeing a grand awakening?

The largest study of conspiracy theories has revealed some interesting and telling facts about how people feel about authority, who really runs the government, and even what demographics are most likely to believe in alternative truths.

The study polled people from 9 different countries over a six-year period and was performed by researchers at the University of Cambridge and YouGov, funded by the Leverhulme Trust. This study is the deepest ever conducted on the subject and marks the first time academics have explored questions of conspiracy beliefs, social trust, and news consumption habits across different countries.

The timing of this study is interesting as many people are turning away from mainstream ‘facts’ and instead are exploring information from independent sources that often provide a completely different narrative than that of controlled mainstream media outlets. In this day and age, as more narrative-breaking truths come forward, some have been suggesting that those who believe in conspiracy theories are unstable and often suffering from some sort of mental illness. Articles and discussions have even popped up pointing at ways of getting people to stop believing in conspiracy theories like in Inc.s “A New Study Has Found a Way to Stop People From Believing in Conspiracy Theories.” It’s not all that surprising when you consider the goal is to keep people uninformed, but the game is becoming more obvious.

Before we continue, yes, some conspiracy theories are false and way out there, but many aren’t. Time and time again we continue to see ‘conspiracy theories’ turn out to be true. Yet we continue to judge alternative information harshly as collectively we aren’t learning our lessons. Think of Snowden for example. People had claimed ‘Big Brother’ was watching and tracking everything we did for years, but it wasn’t until Snowden came forward and proved it that people actually started to realize it was true all along.

Instead of viewing all of those who believe in ‘conspiracies’ as unstable, if you took a more honest and neutral look at it, you might realize most are stable, well educated and intelligent individuals who happened to figure out they were being deceived and thus have performed their own research.

Interestingly, pop culture, education, and even government sneer at these people and instead focus on those who are ‘educated’ and who, quite frankly, vote a specific way, as the stable ones. Classic conditioning of the masses to avoid people from learning truths that would deeply shake those in power.

The Results of The Study

More than 11,500 people were surveyed online by YouGov across nine countries: France, Germany, the UK, Hungary, Italy, Poland, Portugal, Sweden, and the USA. Results were weighted to be representative of each country.

I cover some of my favorite and most telling results, as well as add my commentary in the video below. Beneath the video, you can follow along by text. Some of the results are quite telling in my opinion. Be sure to subscribe to our YouTube channel for more videos too.

• 15% of Brexit leave voters and 11% of remain voters in Britain believed that, regardless of who was officially in charge in government, the world was run by a secret global cabal of people who control events together.

• 44% of people in the UK believe that “even though we live in what’s called a democracy, a few people will always run things in this country anyway”.

• Mistrust of authority was high in the UK, with 77% of people trusting journalists “not much” or “not at all”; 76% distrusting British government ministers; and 74% distrusting company bosses.

• Friends and family, by contrast, were trusted by 87% and 89% of respondents respectively, potentially adding credence to news sources shared by social media contacts.

• Remain voters were more likely (50%) to use social media regularly for news than leave voters (34%), and more likely to read a newspaper website (by 41% to 18%). Of those who got their news from social media, Facebook was used frequently by more leave voters than remainers (74% leave, 65% remain), while the opposite was true of Twitter (39% remain, 28% leave).

• Sweden gave the least amount credit to conspiracy theories, with 52% believing one or more of the theories polled by the researchers, as opposed to 85% for Hungary. In the US that figure was 64% and in France 76%. Sweden also happens to have a giant problem with free speech… they regularly prosecute and jail people for having unpopular opinions.

We live in a fast-changing world. Not just in our evolution of technology and landscape, but in our collective consciousness. People are figuring out, on a mass scale, that things aren’t what they seem in this world and our evolution in individual consciousness is driving deep questioning into what is actually going on in our world. It may appear like a chaotic time, but it’s a necessary step in breaking down old beliefs and paradigms that allow us to give our power away to a small group of elite individuals who rule our entire world. 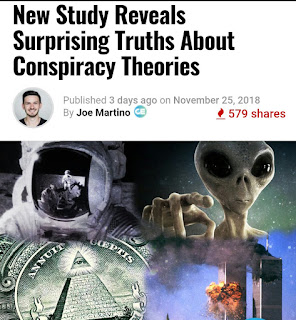