Have We Reached Peak Soros?


All around you, if you look closely enough, you will see the spectre of George Soros lurking behind the headlines.  The caravan, net neutrality, regulating Facebook, the de-platforming of independent media, color revolutions and election meddling, refugee creation and manipulation, the trolls on Twitter, your blog and YouTube, etc.
All of these things we see in the headlines today are a product of George Soros’ money and his singular obsession with re-creating the world in his image.
Soros himself is a product of the times.  A multi-billionaire who could only exist in an era of unprecedented corruption of the basic foundations of society.  An age where the dangerous mix of Marxist ideology governs the somewhat unfettered free flow of capital has resulted in the mother of all bubbles in making money on money.

A primary thesis of this blog is that corrupt money begets a corrupt society.  Corrupting the prices we pay for the things we buy dissociates us from their true cost of ownership  and the opportunity costs of making different choices.
It has given rise to a seemingly all-powerful class of money-changers who manipulate policy to arrogate unearned wealth to themselves, known as rent, and then use that new wealth to fund their next scheme to fleece people of their time.
Because the aphorism is true, time truly is money.  Time is the only true scarce natural resource.  Everything else is, ultimately, recyclable, just ask Einstein.
And men like Soros understand that filling your time with distractions keeps you poorer than you would be otherwise.  This is the main mechanism by which they steal your wealth.
The process of political and ideological radicalization that his NGO’s excel in are part of this scheme.  Get the people outraged over irrelevancies, emotionally charge them up and then set them against each other until the political system breaks.
Even when it fails ultimately, like in Armenia, it succeeds in wasting a year of millions of people’s lives.  Time lost to the machinations of a madman.
How much time do we as Americans spend worrying about the issues du jour concocted by Soros and his cohort Tom Steyer?  And the sad truth is that we need to worry about these issues, even though the costs are high.
Why?
Because Soros’ goal is the destruction of the United States and what it stands for.  He is chaos incarnate continually using his money to stoke conflict which ends in a Hobson’s Choice for us, damned if we do, damned if we don’t.

The Face of Hobson’s Choice

That choice today is one between a Facebook and Silicon Valley that has way too much power over governing our speech, hiding behind broadly-worded EULA’s or accepting regulation of them for abusing their power. 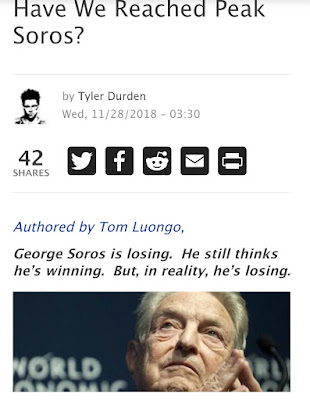