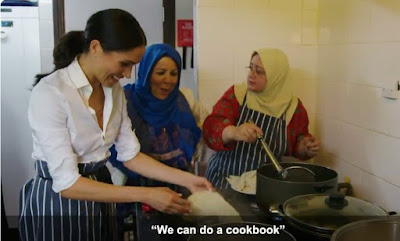 In yet another shocking failure in a long line of interfaith outreach by Western governments since 9/11, The Daily Telegraph reports today that the American-born Duchess of Sussex, Meghan Markle, has been recently promoting a program associated with the notorious Al-Manaar mosque not far from Kensington Palace. The mosque has produced as many as nineteen terrorists -- including "Jihadi John" and his Islamic State "Beatles" who tortured and beheaded Western captives in Syria.

The duchess has helped raise more than $250,000 for the Hubb Community Kitchen operated out of the mosque by promoting a cookbook that royal press agents have billed as celebrating "the power of cooking to bring communities together": 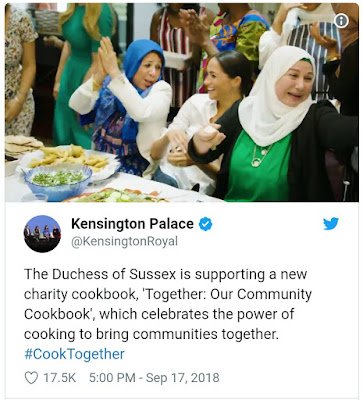 But it appears that there's more to it than that.

According to The Daily Telegraph:

A community kitchen supported by the Duchess of Sussex is housed inside a mosque linked by experts to individuals connected to “terrorist acts” and run by an imam who says girls who listen to music risk becoming strippers.
Meghan visited the Al Manaar Muslim Cultural Heritage Centre on Wednesday after championing a cookbook to raise funds for the “Hubb Community Kitchen” project there to help victims of the fire at nearby Grenfell Tower.

In February it emerged the 37-year-old royal had made secret visits to the mosque in Westbourne Grove, which has also hosted Princes William and Harry, Theresa May and Jeremy Corbyn in recent months.

An investigation by the Henry Jackson Society (HJS), the anti-extremism think tank, has linked the mosque, opened by Prince Charles in 2001, to 19 jihadists, including Islamic State executioner Mohammed Emwazi, also known as Jihadi John.

Research by the HJS suggests the mosque was once attended by three of the four “Beatles”, the Isil terror cell charged with guarding, torturing and killing hostages in Syria and Iraq. As well as Emwazi, Choukri Ellekhlifi, Alexanda Kotey and Aine Davis, all from west London, also have links with Al Manaar.

Emwazi was killed in a U.S. drone strike in Raqqa, Syria, in November 2015.

An ITV News report earlier this week reported that the duchess has made numerous unreported visits to the notorious mosque in recent months: 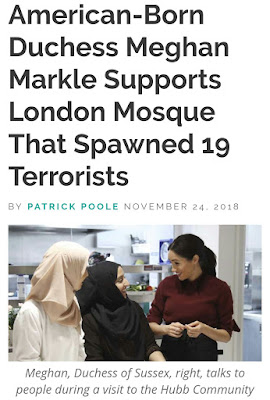