烏克蘭總統要求向俄羅斯宣戰
UKRAINE PRESIDENT ASKS FOR DECLARATION OF WAR AGAINST RUSSIA 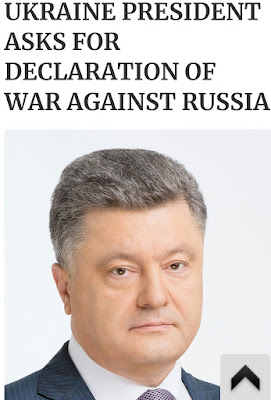 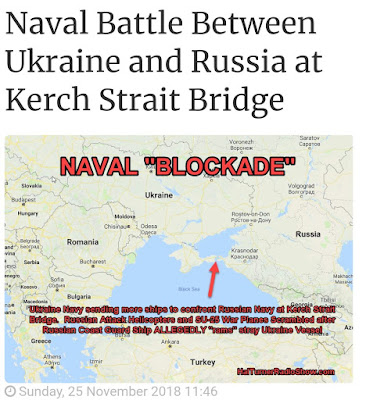 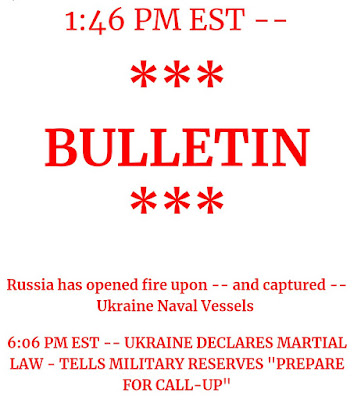 SUBSCRIBERS ONLY -- This article is a continuation of the previously-free story about a Naval battle which took place on November 25 between the Ukrainian and Russian Navies, near the Kerch Strait which separates the Black Sea from the Sea of Azov.

During that confrontation, heavy gunfire erupted.  Three Ukrainian navy boats were hit and disabled, leading to them and their crews being CAPTURED by Russia.

As of late evening in Ukraine, Martial Law is being implemented, Deputies from the Rada (Their version of a Parliament/Congress) have been ORDERED to return to the capital of Ukraine, Kiev, for a vote on a "State of War with Russia."  The vote is scheduled for twelve hours from now.

During the hours that live updates were taking place in the original story HERE, I asked readers politely, several times, for financial support to pay for the heavy data transfer charges I will be hit with on account of so much web traffic.   As of 7:30 PM on Sunday night, the article had been viewed by 27,481 unique visitors.  Of those, Joe R., Tamara K., the Hart Family Ent., Susan B.. Sharon P.,  "HJ", Ambergris, and Sue Ellen D. made donations.   That's eight people out of 27,481.   As such, updates to this situation are now for SUBSCRIBERS ONLY.  (I will reach out to those 8 donors and establish access for them via email)

Subscribers can LOGIN and click the link below to get all the latest info and Covert intelligence via my former colleagues in the Intelligence Community from my years with the FBI Joint Terrorism Task Force.

Those who are not yet subscribers can sign-up right now and gain immediate access for $1 a week, billed Quarterly ($13) HERE or for $5 a month, billed monthly ($5) HERE.  If you are UNABLE or UNWILLING to use online financial transactions, you can still sign-up, just select OFFLINE PAYMENT on the sign-up form and you'll get an email telling you where to mail cash, check or money order.  Your access will be turned on when your payment arrives.  Those having trouble logging-in can email info@HalTurnerRadioShow.com

Those who ignored/refused the polite requests for voluntary donations, can either subscribe or get nothing.  They don't work for free; neither do I.