這些國家在靜靜地快速拋售美元
These Countries Are Quickly and Quietly Dumping the Dollar

Over the past few months, there has been a steady uptick in the number of countries dumping significant portions of their dollar holdings. This is causing many people to worry whether or not the US economy is in for a massive shock sooner, later, or somewhere in between.

While American corporate media outlets either ignore the developments entirely or claim that there is nothing to worry about, the reality is that the dumping of the dollar is a process that is clearly underway. More than that, it appears it is a process that is at least partially coordinated by a number of countries that have been targets of American sanctions and financial bullying in the “post 9/11 world.”

Thus, while corporate media outlets ignore the vanishing dollar dominance and reassure their hapless audience that everything is fine, alt media outlets are predicting a second Weimar Republic, this time in North America.

But what is really going on with the recent dollar dumping? Who is actually dumping the dollar and what kind of effects could we really expect to see in America if the dollar is truly abandoned?

Who Is Dumping The Dollar?

Since the dollar currently enjoys its status as the world’s reserve currency, it is constantly being bought and sold by nations across the entire planet. This arrangement is essentially what is keeping the dollar strong even after the United States embraced neo-liberal Free Trade policies that saw the greatest economic system the world has ever known turned into a shell of its former self. This arrangement allows the United States to sell its “debt” to the rest of the world, which other countries are willing to buy because of the stability of the American governmental system and the fact that America is still an economic powerhouse.

But as the US stretches its military and financial forces thin in the course of expanding its empire across the world, the collapse of that empire looms and, with it, increasingly jittery feet from countries desiring to make prudent financial decisions. For countries tired of being victims of the empire, those who desire a “multipolar” world, and those seeking to expand their own empires, however, the smell of blood is wafting through the air.

China, the emerging and competing empire, has already started the process of dumping the American dollar in a careful and coordinated fashion. This is particularly concerning since China holds so much of America’s debt and so many US dollars. If China dumped all of its holdings at once, America would likely enter a new financial crisis. Fortunately for Americans, however, such an immediate move would also throw China into a crisis which is most likely the main thing holding China back.

But make no mistake. China is moving forward with the plan of relieving itself of the dollar. After all, the country recently inked a deal to trade oil in yuan instead of the dollar.

“Mainland it is laying the ground for the Belt and Road Initiative, and China is even sweetening the pot by offering swap facilities to local countries to promote the use of the yuan,”  Stephen Innes, Head of FX Trading for OANDA in Asia Pacific told RT.

Indeed, it appears that developing country-to-country trading mechanisms are emerging as well which will eventually subvert the US dollar as the world reserve currency. Interestingly enough, the development of such a system is a result of aggressive Americans sanctions and financial bullying over the past few decades. 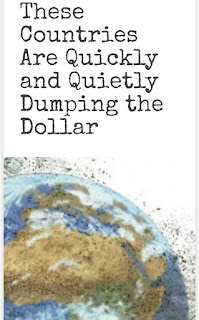