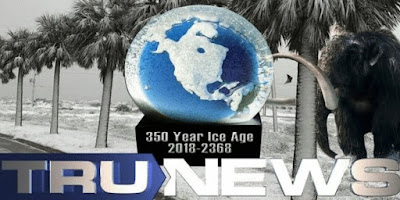 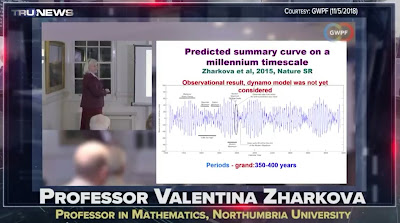 In this new story by Michael Snyder over at End of the American Dream that Steve Quayle had linked to on his website  this morning, Snyder reports what may be one of America's coldest and snowiest November's ever may only be getting worse.

While the left continues to scream 'global warming' and attacking President Trump for backing out of the Paris Climate change agreement, in the only video at the bottom of this story, Rick Wiles and TruNews feature Professor Valentina Zkarkova, whose latest weather models have been updated to show our planet may now be entering a cold snap lasting not only decades, but centuries.

And while we won't go out on a limb and claim a 350-year ice age is coming to our planet as we read in this TruNews story and hear in the video from Professor Zkarkova, as Ice Age Now had reported back on November 12th in a story which the Drudge Report had linked to, according to NASA scientist Martin Mlynczak, we could be witnessing record cold weather in a matter of months due to a lack of sun spots.

“If current trends continue, it could soon set a Space Age record for cold,” said Mlynczak. “We’re not there quite yet, but it could happen in a matter of months.” And in the same story they report that according to Dr. Tony Philips back on September 27th, “The sun is entering one of the deepest Solar Minima of the Space Age".

And as we see in the map on the top of this story taken from this November 27th story at the Weather Channel, approaching the end of November, it's been one of the most miserable starts to winter on record with the 'misery index' at 'extreme' or 'severe' for huge chunks of the country. From that story.

It's already one of the coldest and snowiest starts to the winter season in parts of the Northeast, Midwest and Plains, and we haven't finished November yet.

According to the Accumulated Winter Season Severity Index (AWSSI) from the Midwest Regional Climate Center, 74 cities from New England to the Plains and Rockies have seen an extreme season-to-date of cold and snow as of Nov. 27.

This index takes into account the "intensity and persistence of cold weather, the frequency and amount of snow and the amount and persistence of snow on the ground," the Midwest Regional Climate Center says. Wind and mixed precipitation, such as freezing rain, are not a part of the index.

As Snyder reports in his new story, America's freakish weather in November is just a taste of things to come with winter not even officially kicking off for 3 more weeks and already city after city hitting record cold temperatures for the month. Combined with even more cities that have hit record precipitation rates for the month of November leads us to ask, are weather modification programs going on? From Snyder's story:

And we have witnessed an extraordinary amount of precipitation this month as well. In fact, this has been the wettest November ever recorded for major cities all along the east coast…

And while Snyder asks what's going on with all of this crazy weather and avoids the topic of weather modification while pointing to the previously mentioned NASA scientists warning of an approaching mini-ice age, he concludes his story by reminding us how often throughout history such periods of cooling upon our planet Earth have caused great disruptions to the global food supply, which even now scientists are warning is becoming increasingly vulnerable.

A new report penned by 130 national academies warns that the food supply is becoming increasingly vulnerable to extreme weather by driving the conditions that will make such events even worse in the future.

At the same time, humanity continues to fall short of nutrition targets around the world, with the number of undernourished people steadily on the rise. 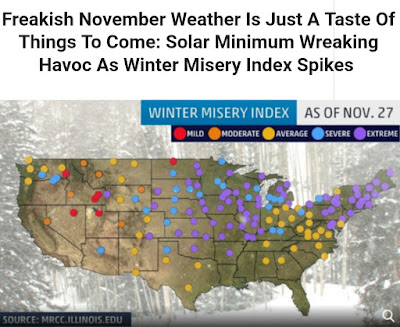