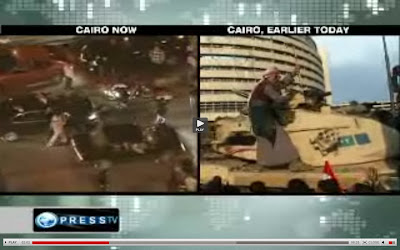 Egyptians celebrate the departure of Mubarak, while the US continues to plan behind the scenes with their bought Egyptian military to retain the same old age imperialistic agenda against democracy.
埃及人慶祝穆巴拉克的離開，而美國繼續計劃在幕後與他們收買的埃及軍隊，保留相同的舊時代帝國主義議程反對民主。

Press TV interviewed writer and Radio Host, Stephen Lendman regarding the future of Egypt and the imperialistic dark forces of the US, which still may have plans for the Egyptian people.
新聞TV採訪作家和電台節目主持人斯蒂芬林敏，對埃及的未來和美國的帝國主義黑暗勢力，它仍可能有計劃給埃及人民。
Press TV: Stephen Lendman is a writer and Radio Show Host. He joins me on the line from the Big Apple (New York). Many thanks for being with us Mr. Lendman. What is your initial reaction to President Mubarak's stepping down?
新聞TV：斯蒂芬林敏是一位作家和電台節目主持人。他從大蘋果（紐約）加入我的隊伍。林敏先生，非常感謝您與我們一起。你對穆巴拉克總統下台的最初反應是什麼？
Lendman: I indeed do have a reaction. Let me say that I live in the little apple not the big apple. I live in Chicago. We don't use that expression. We have other expressions for Chicago such as the “City of Broad Shoulders.” I have a very strong reaction to what is going on. I have been tuning in sporadically to Al-Jazeera's online feed that anybody can pick up, and they have done a wonderful job. I tuned in the moment after Mr. Suleiman made his extremely brief announcement. Then all I saw was the incredible mass of humanity cheering non-stop. The announcer at Al-Jazeera was saying nothing. This went on and on. I simply didn't know what was going on until finally he broke in and made the announcement that Mubarak resigned.
林敏：我確實是有反應，讓我說我住在小蘋果而不是大蘋果裏，我住在芝加哥。我們不用那種表達，我們對芝加哥還有其它的表達形式，例如“寬肩膀的城市。“我對發生中的事有很強烈的反應，偶爾地我一直在收看半島電視台的在線提要，那任何人都可以揀選，和他們做出奇妙的工作。在蘇萊曼先生作出他十分簡短的公告後那一刻我便收看，然後我看到的全是令人難以置信的大羣人類在歡呼不停。在半島電視台的播音員沒說什麼，這種情況斷斷續續。我根本不知道發生什麼事，直到最後他闖入並作出宣布了穆巴拉克辭職。
I began writing about this in January, and it was either in my first or second article. I basically said Mubarak is gone. All that was uncertain was the timing, but he was absolutely gone because for some time now he has been damaged goods for Washington. Washington wanted him removed but they had there on way of doing this.
我在1月開始寫關於這，和它定是在我的第一或第二篇文章，我基本上說穆巴拉克已經一去不復返了，全不確定的衹是時間，但他絕對是要走的因為現在已一段時間他已損壞華盛頓合意的。華盛頓想要他被移除，但他們已在那裡在做這事的路程上。
So now that he is gone, I would hold the cheers if I were the people of Egypt because their work has just begun. It didn't end. It did not end today. What's next is most important and I strongly believe that Egypt's military can with forces in Washington, who hold the real power, plan a much different outcome than the people of Egypt want and deserve. That's more than a fear. I have seen this happen repeatedly in country after country. I have written about so much of it. I'm certain the same thing is planned for Egypt. It doesn't mean they will be defeated because what will happen in the end is very much uncertain at this point. There is no guarantee that Washington will prevail.
所以現在他被迫走了，如果我是埃及的人民我會忍住歡呼聲，因為他們的工作才剛開始，並未結束，今天沒有結束。下一步最重要的是什麼，我堅信埃及的軍方能與持有實權的華盛頓部隊計劃一非常不同的結果，比起埃及人民所想和渴望的，那是多於恐懼。我已經看到這種情況多次在一個接著一個的國家發生，我已寫了那麼多關於它，我敢肯定同樣的事在埃及計劃。它並不意味他們將被打敗，因為將會在結尾時發生的在這一刻是非常不確定的，沒有保證華盛頓將佔上風。
The Egyptian people absolutely have a chance of maybe not getting everything they want, but getting an awful lot that would make a major difference in their lives. It's up to them to understand that and to keep this struggle alive. And if they do that, they will get a lot more than they think they may have gotten now. So I worry about them and I worry the protests will fade and everybody will go back to their normal lives. Thereafter, the dark forces that they are not seeing will maneuver to defeat them. And they will unless the Egyptian people stop it.

Press TV: I wish the Egyptian protesters were able to listen to you, but that is not possible for now.

Lendman: I wish I could be the Google Executive with a microphone standing in front of that crowd to address them because I would explain to them what I know so well from US history, including the fact that Washington wants imperial domination everywhere. There is no country excluded and that includes your own country. They don't want any country excluded from their imperial grasp. The idea of letting a country become independent and democratic is absolutely unimaginative to them including right here in America. We have what I call a rhetorical democracy - it's talk, it's not reality.

We have a theater that substitutes for elections; we have a one-party state with two wings; we have people believing that one person or one party may be different from the other, but it's not different, only on non-important matters. But when it comes to major issues, anything involving big money, banking , or war Vs peace, human rights, civil liberties - both parties are absolutely 100% together in lock-step. And they're absolutely pro-power and anti-people. And there's no question about that. So, if Washington won't do it here and it wants control virtually over every country in the world with no exception, there is no chance that Washington will tolerate something in Egypt that they won't tolerate right here at home.

Press TV: I wonder what President Obama's advisors or he himself make of people in this part of the world who are technologically savvy with access to Satellite channels and the Internet; they are moving with the world intellectually; they understand what is going on and when the president of a country makes a statement it's followed almost simultaneously by the American president most of time in defense of that person. People don't want American intervention in their country that doesn't seem to be the case on the American part and the White house' part.

Lendman: Well very definitely they don't want American intervention and I think that even though it is not in very publicly displayed in the streets in Tahrir Square, I think that Egyptians understand that Washington, going back many, many years, has meddled in the internal affairs of Egypt. And I must say that the Egyptian people are far, far savvier; the Iranian people are far, far savvier than Americans - it's astonishing. And it's so depressing to me that with all the technological accessibilities that there are in America - so many people have computers; so many people can find out what's going on; if they make a modest effort to do it; and yet they don't.

They worry more about the sports teams they're rooting for; the latest films they want to go and see; the latest fashions that they want to buy - all the things that mean absolutely nothing in their lives and they spend their time talking about this...Meanwhile their government is literally destroying their rights in plain sight in front of their eyes and they don't react to it. And I say to myself and I have my own radio program a few times a week and with my guest yesterday I said to him, “When will Americans rally in the streets the way the Egyptian people are doing now? When will they realize that their government is betraying them and it keeps getting worse and worse?”

The Egyptian people decided they will not put up with this and finally today they succeeded in getting rid of Mubarak. But again I repeat the job has just begun. My guest answered my question and I agreed with him and his answer was, “When they get hungry. When they don't know when their next meal is coming from; when they don't know whether they can feed their children - then the anger level will boil over.” But does it have to wait for that?

Meanwhile they've lost so much and so sadly they don't know it. 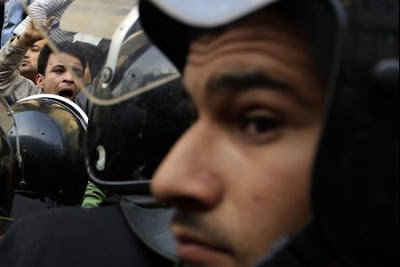 Egypt's army has clashed with protesters that refuse to leave Cairo's Liberation Square two days after the US-backed dictator Hosni Mubarak was ousted from power.
埃及軍隊與堅拒不離開開羅解放廣場的示威者發生衝突，在美國支持的獨裁者胡斯尼穆巴拉克的權力被推翻兩天後。

Soldiers on Sunday scuffled with thousands of protesters camping out in the Square, the focal point of massive rallies that brought down Mubarak on Friday, a Press TV correspondent reported.

Shouting slogans, protesters fought street battles with soldiers forcing them to back away, the report added.

The protesters, remaining in Cairo's central Liberation Square on Saturday night, warned of holding further rallies if the military fails to fulfill its promise of a peaceful transition of power to a democratic civilian system.

Eighteen days of revolution across Egypt forced the embattled Mubarak to leave office on Friday, handing over power to a military council.

The military promised "a peaceful transition of power" to an elected civilian government on Saturday in order to build "a free democratic state."

However, the new military leadership did not set a timetable to fulfill the pledge.

Thousands of protesters vowed to remain on the major landmark until their demands are met.

Activists have demanded the release of political prisoners, the lifting of a 30-year-old state of emergency and the disbandment of military courts. They say demonstrations will continue until the army accepts the reforms.

According to the United Nations, the Egyptian revolution left more than 300 people dead and thousands more injured.