Although Levi’s 1861 depiction of Baphomet is the most famous one, the name of this idol has been circulating for over a thousand years, through secret societies and occult circles. The first recorded mention of Baphomet as a part of an occult ritual appeared during the era of the Knights Templar.
雖然李維斯的1861年Baphomet描寫是最享負盛名的，但這偶像的名字通過秘密社團和神秘學圈子已一直流傳超過一千年。第一宗有記錄提及Baphomet作為神秘學儀式一部分的，是出現在聖殿騎士的時代。 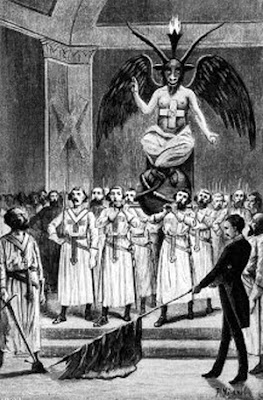 It is widely accepted by occult researchers that the figure of Baphomet was of a great importance in the rituals of the Knights Templar. The first occurrence of the name Baphomet appeared in a 1098 letter by crusader Anselm of Ribemont stating:
它已被神秘學研究人員廣泛接受，Baphomet這人物在聖殿騎士的儀式中有很大的重要性。Baphomet這名字第一次出現在1098年的一封信，由十字軍Ribemont的安瑟倫申明：


“As the next day dawned they called loudly upon Baphometh while we prayed silently in our hearts to God; then we attacked and forced all of them outside the city walls.” 7
“當第二天破曉，他們大聲呼叫Baphometh而我們默默地在心中向上帝禱告；然後我們攻擊和迫退他們所有人在城牆外。”7

During the Templar trials of 1307, where Knight Templars were tortured and interrogated by request of King Philip IV of France, the name of Baphomet was mentioned several times. While some Templars denied the existence of Baphomet, others described it as being either a severed head, a cat, or a head with three faces.
在1307年的聖殿試驗，這其中聖殿騎士被法國國王菲利普IV世所要求進行嚴刑迫供， Baphomet的名稱被多次提到。雖然有些聖殿騎士否認Baphomet的存在，其他人卻將之形容為割下的頭顱、一隻貓、或有三塊面的頭的其中一樣。
While books aimed for mass consumption often deny any link between the Knights Templar and Baphomet, claiming it to be an invention of the Church to demonize them, almost all reputed authors on occultism (who wrote books intended for initiates) acknowledge that the link. In fact, the idol is often referred to as “the Baphomet of the Templars”.
而旨在針對大眾消費的書籍，往往否定聖殿騎士和Baphomet之間的任何聯繫，聲稱它是一項教會的發明以醜化他們，幾乎所有知名的神秘主義作者（他們寫書旨在針對初入門者）確認了該關係。事實上，該偶像是常常被指稱為“聖殿騎士的Baphomet”。


“Did the Templars really adore Baphomet? Did they offer a shameful salutation to the buttocks of the goat of Mendes? What was actually this secret and potent association which imperilled Church and State, and was thus destroyed unheard? Judge nothing lightly; they are guilty of a great crime; they have exposed to profane eyes the sanctuary of antique initiation. They have gathered again and have shared the fruits of the tree of knowledge, so that they might become masters of the world. The judgement pronounced against them is higher and far older than the tribunal of pope or king: “On the day that thou eatest thereof, thou shalt surely die,” said God Himself, as we read in the Book of Genesis.

Yes, in our profound conviction, the Grand Masters of the Order of the Templars worshipped the Baphomet, and caused it to be worshipped by their initiates; yes, there existed in the past, and there may be still in the present, assemblies which are presided over by this figure, seated on a throne and having a flaming torch between the horns. But the adorers of this sign do not consider, as do we, that it is a representation of the devil: on the contrary, for them it is that of the god Pan, the god of our modern schools of philosophy, the god of the Alexandrian theurgic school and of our own mystical Neo-platonists, the god of Lamartine and Victor Cousin, the god of Spinoza and Plato, the god of the primitive Gnostic schools; the Christ also of the dissident priesthood. This last qualification, ascribed to the goat of Black Magic, will not astonish students of religious antiquities who are acquainted with the phases of symbolism and doctrine in their various transformations, whether in India, Egypt or Judea.” 8

共濟會
Freemasonry
Shortly after the release of Levi’s illustration, the french writer and journalist Léo Taxil released a series of pamphlets and books denouncing Freemasonry, charging lodges with worshipping the devil. At the center of his accusations was Baphomet, which was described as the Mason’s object of worship.
在李維斯的圖發布後不久，法國作家和記者利奧 Taxil發布一系列的小冊子和書籍譴責共濟會，指控各分部崇拜魔鬼。在他的指控中央的是Baphomet，被形容為共濟會員的崇拜對象。 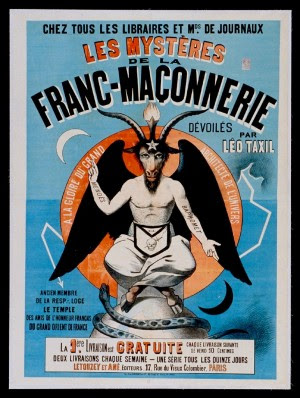 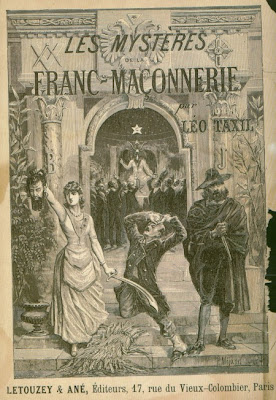 The Book cover of “Les mystères de la franc-maçonnerie” depicting a Masonic ritual presided by Baphomet, who is literally being worshipped.
“共濟會的奧秘”一書的封面描繪一項由Baphomet主持的共濟會儀式，他是實質上正在被崇拜的。 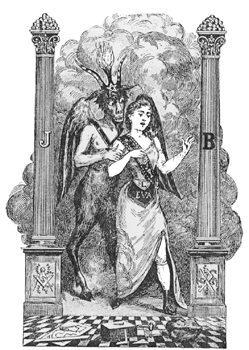 In 1897, after causing quite a stir due to his revelations on French Freemasonry, Léo Taxil called a press conference where he announced that many of his revelations were fabrications 9. Since then, this series of events has been dubbed the “Léo Taxil Hoax”. However, some would argue the probability that Taxil’s confession may have been coerced in order to quell the controversy involving Freemasonry.
於1897年後，由於他的法國共濟會揭示造成頗一陣子的轟動，Leo Taxil召開記者招待會，其中他宣布，他的許多揭示是捏造的9。自此之後，這一系列的事件被戲稱為“Leo Taxil騙局”。然而有人會爭論，Taxil的供認有可能已被脅迫，以圖平息涉及共濟會的爭議。
Whatever the case may be, the most likely connection between Freemasonry and Baphomet is through symbolism, where the idol becomes an allegory for profound esoteric concepts. The Masonic author Albert Pike argues that, in Freemasonry, Baphomet is not an object of worship, but a symbol, the true meaning of which is only revealed to high-level initiates.
無論情況如何，共濟會和Baphomet之間最有可能的的關連是通過象徵主義，由此該偶像變成深博秘傳概念的一個象徵。共濟會員作者阿爾伯特派克認為，在共濟會Baphomet並不是一個崇拜的對象，而是一種象徵，它真正的含義只會透露給高層次的會員。


“It is absurd to suppose that men of intellect adored a monstrous idol called Baphomet, or recognized Mahomet as an inspired prophet. Their symbolism, invented ages before, to conceal what it was dangerous to avow, was of course misunderstood by those who were not adepts, and to their enemies seemed to be pantheistic. The calf of gold, made by Aaron for the Israelites, was but one of the oxen under the layer of bronze, and the Karobim on the Propitiatory, misunderstood. The symbols of the wise always become the idols of the ignorant multitude. What the Chiefs of the Order really believed and taught, is indicated to the Adepts by the hints contained in the high Degrees of Free-Masonry, and by the symbols which only the Adepts understand.” 10

Aleister克勞利
Aleister Crowley
The British occultist Aleister Crowley was born about six months after the death of Eliphas Levi, causing him to believe that he was Levi’s reincarnation. Partly for this reason, Crowley was known within the O.T.O., the secret society he popularized, as “Baphomet”.
英國的神秘學者 Aleister克勞利出生於Eliphas利維死後約六個月，使他相信他是利維的輪迴。為此部分原因，在他普及的秘密社團OTO中，他以“Baphomet”知名。 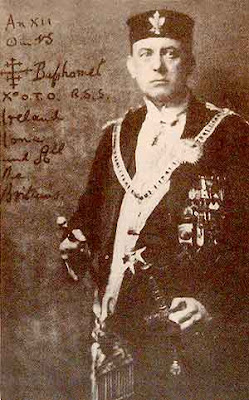 A signed picture of Crowley as Baphomet.
克勞利作為Baphomet的簽名照。

Here’s Crowley’s explanation of the etymology of the name Baphomet, taken from his 1929 book The Confessions of Aleister Crowley:
下面是克勞利對Baphomet名稱的詞源解釋 ，取自他1929年的書克勞利的自白：


“I had taken the name Baphomet as my motto in the O.T.O. For six years and more I had tried to discover the proper way to spell this name. I knew that it must have eight letters, and also that the numerical and literal correspondences must be such as to express the meaning of the name in such a ways as to confirm what scholarship had found out about it, and also to clear up those problems which archaeologists had so far failed to solve…. One theory of the name is that it represents the words ???? ??????, the baptism of wisdom; another, that it is a corruption of a title meaning “Father Mithras”. Needless to say, the suffix R supported the latter theory. I added up the word as spelt by the Wizard. It totalled 729. This number had never appeared in my Cabbalistic working and therefore meant nothing to me. It however justified itself as being the cube of nine. The word ?????, the mystic title given by Christ to Peter as the cornerstone of the Church, has this same value. So far, the Wizard had shown great qualities! He had cleared up the etymological problem and shown why the Templars should have given the name Baphomet to their so-called idol. Baphomet was Father Mithras, the cubical stone which was the corner of the Temple.” 11

Baphomet is an important figure in the Thelema, the mystical system he established at the beginning of the 20th century. In one of his most important works, Magick, Liber ABA, Book 4, Crowley describes Baphomet as a divine androgyne:
Baphomet在Thelema是一個重要人物，那是一個神秘系統他在20世紀初建立。在他其中一份最重要的作品Magick，LIBER ABA第四冊，克勞利描術Baphomet為一個神聖的陰陽人：


“The Devil does not exist. It is a false name invented by the Black Brothers to imply a Unity in their ignorant muddle of dispersions. A devil who had unity would be a God … ‘The Devil’ is, historically, the God of any people that one personally dislikes … This serpent, SATAN, is not the enemy of Man, but He who made Gods of our race, knowing Good and Evil; He bade ‘Know Thyself!’ and taught Initiation. He is ‘The Devil’ of the Book of Thoth, and His emblem is Baphomet, the Androgyne who is the hieroglyph of arcane perfection … He is therefore Life, and Love. But moreover his letter is ayin, the Eye, so that he is Light; and his Zodiacal image is Capricornus, that leaping goat whose attribute is Liberty.” 12

The Ecclesia Gnostica Catholica, the ecclesiastical arm of Ordo Templi Orientis (O.T.O.), recites during its Gnostic Mass “And I believe in the Serpent and the Lion, Mystery of Mystery, in His name BAPHOMET.” 13 Baphomet is considered to be the union of Chaos and Babalon, masculine and feminine energy, the phallus and the womb.

撒旦教會
The Church of Satan
Although not technically a secret society, Anton Lavey’s Church of Satan remains an influential occult order. Founded in 1966, the organization adopted the “Sigil of Baphomet” as its official insignium.
雖然技術上不是一個秘密社團，安東 Lavey的撒旦教會仍然是一個有影響力的神秘學秩序。成立於 1966年，該組織採用“Baphomet的符印”作為其官方的佩章。

The Sigil of Baphomet, the official symbol of the Church of Satan features the Goat of Mendes inside an inverted pentagram.
Baphomet的符印，撒旦教會的官方象徵有門德斯的山羊在一個倒五芒星裡面。 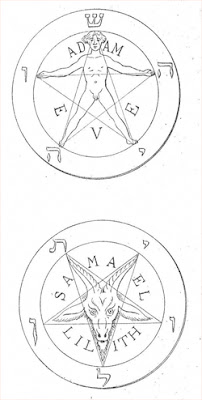 According to Anton Lavey, the Templars worshipped Baphomet as a symbol of Satan. Baphomet is prominently present during in Church of Satan rituals as the symbol is placed above the ritualistic altar.
據安東 Lavey，聖殿武士崇拜Baphomet作為一個撒旦的象徵。 Baphomet在撒旦教會的儀式是突出地存在，作為置放在祭壇儀式上的標誌。

In The Satanic Bible, Lavey describes the symbol of Baphomet:
在撒旦聖經， Lavey描述Baphomet的象徵：


“The symbol of Baphomet was used by the Knights Templar to represent Satan. Through the ages this symbol has been called by many different names. Among these are: The Goat of Mendes, The Goat of a Thousand Young, The Black Goat, The Judas Goat, and perhaps the most appropriately, The Scapegoat.

Baphomet represents the Powers of Darkness combined with the generative fertility of the goat. In its “pure” form the pentagram is shown encompassing the figure of a man in the five points of the star – three points up, two pointing down – symbolizing man’s spiritual nature. In Satanism the pentagram is also used, but since Satanism represents the carnal instincts of man, or the opposite of spiritual nature, the pentagram is inverted to perfectly accommodate the head of the goat – its horns, representing duality, thrust upwards in defiance; the other three points inverted, or the trinity denied. The Hebraic figures around the outer circle of the symbol which stem from the magical teachings of the Kabala, spell out “Leviathan”, the serpent of the watery abyss, and identified with Satan. These figures correspond to the five points of the inverted star.” 14