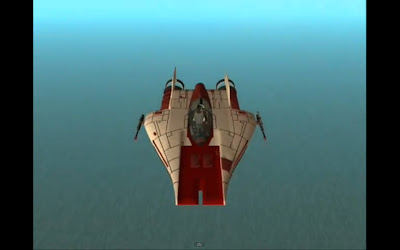 Boeing is working on a new flat plane that would be able to take off and land vertically using dozens of new pulse jets they call Pulse-Ejector-Thrust-Augmentors. Of course, these things were originally created by Nazis.
波音公司正在開發一種新的扁平飛機，使用幾十個新的脈衝射流會能垂直起飛和降落，他們稱之為脈衝噴射推力加強器。當然，這些東西原是由納粹創建的。
While a primitive working pulse jet was patented by Russian engineer V.V. Karavodin, it was German engineers Georg Madelung and Paul Schmidt who actually made the first efficient design, which was apt for flying.
雖然原始運作的脈衝射流由俄羅斯工程師 VV Karavodin取得專利，但卻是德國工程師喬治馬德隆和保羅施密特實際做出第一個高效的設計，那是易於作飛行的。
The design was adopted by Goering’s Luftwaffe for the V-1 bombs that terrorized England during WW2. Fortunately, their bloody Buzz Bomb’s engine was inefficient, noisy, prone to failure and had a very low life expectancy—not to mention that they were slow enough to be shot down by British interceptors—unlike the ballistic rocket-based V-2 created by another Nazi, the father of the Saturn rocket Wernher von Braun.
該設計由戈林的德國空軍Luftwaffe採用來投二戰期間嚇驚英國的V-1炸彈。幸運的是，他們的血腥吱吱叫炸彈的引擎是效率低、噪音大和容易出現故障，及預期壽命非常低 - 更何況它們夠慢足以被英國的攔截機擊落 - 不像以彈道火箭為基礎的V-2，由另一個納粹土星火箭之父沃納馮布勞恩創建。
Boeing claims that their PETA technology doesn’t have any of the inconveniences of Madelung and Schmidt’s design. The design seems so solid that the Pentagon is actually contemplating the possibility of using them to build a large flat VTOL aircraft capable of transporting tanks and troops with ease. A prototype may soon see the light of day.
波音公司聲稱，他們的PETA技術沒有任何馬德隆和施密特設計的不便。設計似乎那麼硬淨所以五角大樓實際上在考慮可能性，使用它們建立一架大而扁平的垂直起降飛機，能夠方便運送坦克和部隊，原型可能很快看到。

Unlike turbofans, the pulse jet engine has no moving parts at all. Its core—situated at the top of the engine—generates shockwaves via a subsonic combustion of fuel. Each shockwave forces hot exhaust air out of the tube, creating a pressure differential that fills the engine with cold air. New fuel then mixes with that air through computer-controlled injection similar to the technology used in cars, starting a new shockwave. This process is repeated at very high speeds, providing with the thrust needed to lift the aircraft from the ground.

The PETA cell is encased in a thrust augmenting duct that channels more air into the flow, increasing its power. Every cell is independently controlled and can be grouped on the belly of any aircraft. And since each cell has its own direction controls, you can basically maneuver the ship while taking off or landing in any way you want—even if it’s basically a large flat brick like the Millennium Falcon. Then, when the ship is in the air, horizontal thrust engines take over.

Unlike other VTOL designs, like the Harrier, Osprey or the VTOL version of the F-35 Lightning II, the pulse jet cell technology seems a lot simpler and efficient. It doesn’t mix the vertical and horizontal thrust, so the PETA-based airplane designs would be a lot easier and cheaper.

And Boeing claims that, since PETA cells have no moving parts, they are easy to maintain and have very low failure rates. They say they are very inexpensive to build and they are insensitive to turbulence and debris. Not only that, but they can be part of the frame of the aircraft itself—reducing weigh—and be distributed in such a way that they are redundant and tolerant to battle damage. [MORS (.PDF) via The Dew Line]