Rage Against the Regime: Georgia protests in face of force
針對政權的憤怒：格魯吉亞抗議面對武力
2011-05-24 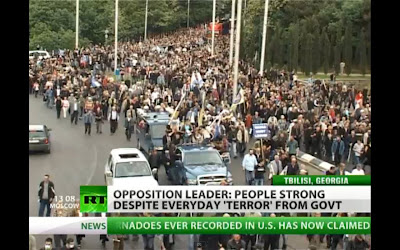 格魯吉亞是否在'憤怒日'的邊緣？
Is Georgia on the brink of a 'day of rage'?
By Fred Weir Fred Weir –
Mon May 23, 1:18 pm ET
Translation by Autumnson Blog

Moscow – After three days of sometimes violent street demonstrations, Georgian opposition leaders on Monday promised a "day of rage" on May 25 that will sweep away President Mikhael Saakashvili – who has withstood similar protest waves against his controversial seven-year rule in the past.
莫斯科 - 經過三天有時暴力的街頭示威，格魯吉亞反對派領導人週一承諾在5月25日的“憤怒日“，掃走總統米哈伊爾薩卡什維利 - 他經已忍受類似的抗議浪潮針對他過去的爭議性七年統治。
Irakli Okruashvili, a former Defense minister who turned against Mr. Saakashvili and is wanted by Georgian authorities, has pledged to end his four-year exile in France and return Wednesday to lead what he has openly suggested could include a military mutiny to overthrow the regime.
掉轉槍頭反對薩卡什維利的前國防部長伊拉克利Okruashvili，亦是格魯吉亞當局通緝的人，已承諾結束他在法國流亡的四年生活，星期三回來帶領他已公開提出，可能包括軍事兵變以推翻政權。
"I can promise you two things: that I will be in Georgia on May 25 and that this day will be the last one for this government," Mr. Okruashvili told the Georgian TV news channel Maestro on Sunday.
“我可以向你應允兩件事情：5月25日我將在格魯吉亞和這一天將是這政府的最後一天，“Okruashvili先生週日告訴格魯吉亞電視台新聞頻道大師。
RELATED How 5 revolutions got their names

The Public Assembly, a coalition of opposition groups, chose Wednesday – the day before Georgia celebrates Independence Day – as a day to highlight their grievances against Saakashvili, which include his autocratic style of governance, failure to improve living standards, and what appears to be the permanent loss of the Georgian territories of Abhkazia and South Ossetia following a disastrous 2008 war with Russia.

But after Georgian police used truncheons, tear gas, and rubber bullets to break up a mostly peaceful rally of 2,000 outside Georgia's public TV studios on Sunday, leaving several people injured, the coalition's most prominent leader, Nino Burzhanadze, warned that the mood of protest is growing restless.

"A revolution has begun and the authorities have started it, as they use criminal actions against us, while we have only peaceful methods," she told journalists.

Sign up for our daily World Editor's Picks newsletter. Our best stories, in your inbox.

Independent Georgian observers say they find it difficult to explain why the opposition is suddenly erupting into the streets after nearly two years of relative quiescence. Although critics of Saakashvili are numerous, especially in the capital, Tbilisi, the president's party won a massive victory in parliamentary elections a year ago, which, despite being criticized as unsatisfactory by some international observers, seemed to show that he enjoys the support of the majority of Georgians.

The next presidential elections are due in 2013.

"Not much has changed in the past year, the economic and political situations have remained pretty stagnant," says George Khutsishvili, director of the independent International Center on Conflict and Negotiation in Tbilisi. "I can't see anything new that would suggest that Saakashvili would fall. It's true that there's widespread discontent against him, but not so outspoken as in the past.... The main problems are that people's incomes are flat, there is high unemployment, and many people are pessimistic about the country's prospects for development. People hear a lot about reform [from Saakashvili] but see no positive changes in their lives."

The wave of protests began Saturday with a rally of about 10,000 in downtown Tbilisi, followed by several smaller demonstrations around the city that continued on Monday. Experts say it could develop into a drawn-out street confrontation lasting weeks, such as the 2003 "Rose Revolution" that brought Saakashvili to power – a formula that the opposition has twice tried to imitate.

"It's not a revolution yet, but it could develop into one," says Iosif Shatberashvili, head of the opposition Labor Party. "These actions are headed by Nino Burzhanadze, and she knows it is useless to talk to Saakashvili, that the authorities never keep their promises."

Ms. Buzhanadze, a former Rose Revolution colleague of Saakashvili, is seen as one of the strongest and most level-headed of the fractious opposition leaders. She was the target of an elaborate hoax by state-run TV last year, which depicted her in a fake documentary as a puppet of the Kremlin.

Mr. Okruashvili, the former Defense minister, is a more volatile personality, but his ties to the military – which has been implicated in mutiny before – may be a source of concern.

"On Wednesday, the Public Assembly and Okruashvili's newly formed Georgian Party plan to march, and nobody knows how it's going to end," says Mamuka Nebieridze, head of the independent Tbilisi Center of Euro-Atlantic Studies.

He adds that it's not clear what the opposition really wants. "Part of the opposition maintains that free elections are impossible [under Saakashvili], and they want to change that. Another part thinks it is possible to come to terms with the authorities, and to have fair elections that are not marred by fraud....

"Nothing has changed in the past year, and probably that's the main reason people are protesting now: They want changes," says Mr. Nebieridze.

Sign up for our daily World Editor's Picks newsletter. Our best stories, in your inbox.