There was a distinct sense of foreboding that the Hong Kong situation is about to take a far worse turn for the worse during this weekend protest, the 12th in a row, which saw the HK police deploy water cannon on protesters, while three police officers who were allegedly chased and beaten by a mob of club-wielding protesters, pulled their revolvers, with one firing at least one warning shot toward the sky. 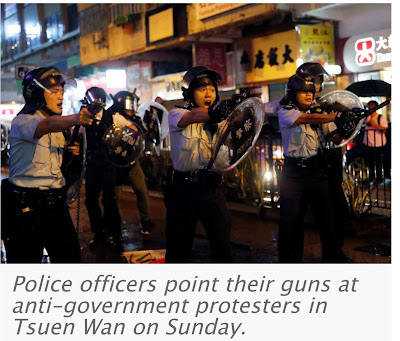 It was the first time a gun had been discharged since the protests triggered by the now-shelved extradition bill began almost three months ago. However, it won't be the last, and to make sure it is positioned properly when the real shooting begins, China sent the strongest warning yet of using troops on Hong Kong’s streets where Beijing says protests have turned into a “Color Revolution,” a clear indication that China's patience with Hong Kong's insurrection has just about ran out.
"It’s not only China central government’s authority but also its responsibility to intervene when riots take place in Hong Kong," the state-run Xinhua News Agency said Sunday in a commentary which was meant to prepare the local population for the inevitable intervention as it recalled comments by former top leader Deng Xiaoping saying Beijing has to act under such circumstances.
In Sunday’s commentary, Xinhua said Hong Kong’s protests have turned into a Color Revolution aimed at overturning the Special Administrative Region’s constitutional institutions, a signal it was ready to take further action. Previously, Chinese officials had described the protests as having some characteristics of a “color revolution.”
To confirm that it had dotted all of its legal i's, Xinhua also said that Hong Kong’s Basic Law and Garrison Law have relative clauses on possible China intervention.
Echoing the Xinhua commentary was a tweet from the Global Times' Editor in Chief, Hu Xijin, who took a break from commenting on the trade war between the US and China, to prepare the public for what was coming, saying "mobs violently smashed a police vehicle and attacked police officers. See how police exercised restraint in order to avoid bloodshed. Feel sympathy for Hong Kong police."

Protesters’ violent acts have pushed Hong Kong to an extremely dangerous edge, the city’s government said in a statement after a day full of violent clashes between demonstrators and the police where an officer fired warning shots in the air.
Two weeks ago, on August 13, President Donald Trump said reports from U.S. intelligence agencies showed the Chinese government was moving troops to its border with Hong Kong. A day earlier, Global Times, a Chinese tabloid run by the People’s Daily, reported that the Chinese People’s Armed Police were assembling in Shenzhen ahead of “apparent large-scale exercises,” where “numerous” armored personnel carriers, trucks and other vehicles of the paramilitary force were seen heading toward Hong Kong’s neighboring city.
https://www.zerohedge.com/news/2019-08-25/chinas-patience-runs-out-beijing-signals-it-has-responsibility-intervene-hong-kong