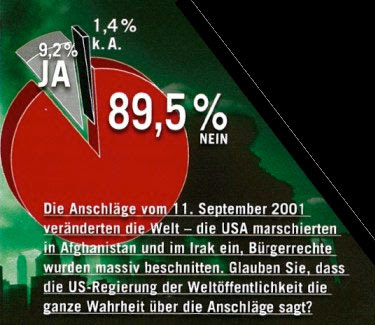 According to a survey conducted by TNS Emnid, one of the largest polling institutes in Germany, nearly 90 percent of Germans do not believe the U.S. government explanation of what happened on September 11, 2001.
根據一項由TNS Emnid進行的調查，它是德國其中一個最大的調查研究所，有近百分之九十的德國人不相信美國政府對2001年9月11日發生的事的解釋。
The poll was conducted for the German magazine World of the Miracles.
調查是為德國雜誌奇蹟世界進行的。
In addition to 89.5% not buying the official 9/11 story, the poll found that 73.7% of surveyed Germans believe that the Kennedy assassination was a conspiracy and nearly 80% believe the CIA conducts covert operations on German soil.
除了89.5％德國人不相信官方的9/11故事，調查發現73.7％的受訪德國人相信肯尼迪遇刺是一個陰謀，和近80％的人相信美國中央情報局在德國的土壤進行秘密行動。
In 2003, a poll conducted by Forsa for the German newspaper Die Zeit found that 31% of Germans under 30 years of age believe the attacks were an inside job.

Skepticism about the official account has increased since 2001. In 2006, a New York Times/CBS News poll revealed only 16% of Americans thought the government was telling the truth about 9/11 and the intelligence prior to the attacks.

In 2004 a Zogby Poll showed that just over half of New Yorkers believed there was a cover up.
In May of 2006, another Zogby poll indicated approximately half of all Americans did not believe the official version.