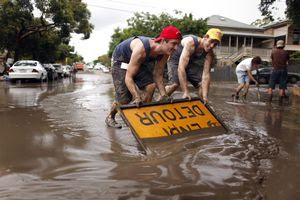 Australia imposed a temporary new tax today to help fund a multi-billion-dollar rebuilding programme after floods devastated infrastructure and ruined thousands of homes and businesses across the eastern seaboard over the past month.
澳大利亞今天實施一項臨時新稅收，以幫助籌措數十億美元的重建計劃，在過去一個月洪水毀壞基礎設施、破壞成千上萬的家庭和在東部沿海地區的企業後。

Following are some questions and answers about the political and economic implications of the one-year levy for Prime Minister Julia Gillard's one-seat minority Labor government, which relies on backing from a sole Green MP and three independents to stay in power.


The new tax guarantees a fiery return to parliament on 8 February, with the conservative opposition opposed to extra taxes.


But the independents and Greens wielding balance-of-power in both the upper and lower houses are mostly from rural and flood-damaged states, and should back a levy that has been tightly targeted to avoid the poor and flood-affected.


Still, Gillard has cut several smaller environmental programs, which could raise some Greens' ire and demands for changes. The possibility of a snap election is more remote as Gillard will want as much time as possible to bring the budget into the black in 2012-13, as promised during last year's election, before facing voters.


The real pressure on Gillard will be from within her own Labor Party, which will be watching how Gillard and Treasurer Wayne Swan can sell what amounts to a one-year tax hike, leading into yet more increases from around 2012 to cut carbon emissions and tax miners.


Neither have shown a great ability to sell their policies since Gillard ousted former Labor leader Kevin Rudd last year in a party coup. Rudd, also a technocrat, was dumped because he could not connect with voters.


Gillard could go the same way. The flood levy will be the biggest test yet for her ability to lead and govern.


If she cannot justify the flood tax in the wake of the country's worst natural disaster, Labor lawmakers will wonder what she can achieve.

The levy, which will raise A$1.8 billion ($1.79 billion), is equal to just 0.15 percent of Australia's A$1.3 trillion in annual economic output. It will be another small blow to fragile consumer confidence, with food prices already soaring around the country, along with fuel and electricity bills.


The tax and associated budget cuts will exacerbate the two-speed economy, divided now between a subdued consumer sector and the country's boom in mining and construction.


Consumer sentiment this month took a 5.7 percent hit amid wall-to-wall media cover of the flood disaster . On the other hand, the money raised by the tax will be spent on rebuilding and should add to economic growth as the year progresses.


Most economists expect a sluggish first quarter, but a brisk pickup from then on. That in turn makes it even more unlikely the Reserve Bank of Australia (RBA) will lift interest rates at its monthly policy meeting on Feb. 1 and probably for a few months to come. Still, it is expected to tighten later in the year.

Maintaining a budget surplus is a political imperative in Australia, rather than economic. The flooding disaster has led to calls for Labor to put off its pledge to return a small A$3.1 billion surplus in 2012-13. In 2010-11, the country's budget deficit stood at A$41.5 billion, or 3 percent of GDP.


But delivering a surplus is vital for Labor to counter long-standing voter perceptions of the party as poor economic managers and recover ground lost after a series of bungled spending projects ahead of last year's dead-heat elections.


Labor spent more than a decade in opposition - losing four elections - before winning power in 2007. During those years, the conservative Liberal-Nationals' coalition government accused Labor of fiscal irresponsibility, citing a supposed budget "black hole" when it was last in office.


When Labor won office in 2007 it promised to rule as an economic conservative, but a A$52 billion spending programme to combat the global financial crisis, which included failed school and environmental spending projects, put Australia in debt and led again to criticism the Labor party was fiscally incompetent.


Now leading a minority government, Gillard is desperate to re-gather support in a country where public borrowing is viewed with suspicion. Sydney University political analyst Rod Tiffen has said "there are rarely any publicly palatable solutions to budget deficits".


Gillard will want to deliver a surplus on time as promised ahead of the next election due in late 2013, as failure to do so would mean Labor will have been in power six years without controlling budget spending.
http://www.independent.co.uk/news/world/australasia/australia-imposes-flood-tax-to-aid-recovery-2195830.html