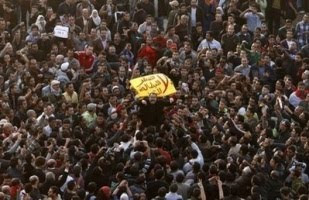 Anti-government protests in Egypt moved into their third day early Thursday, with unconfirmed reports of police "massacres" of civilians in the port city of Suez.
埃及反政府抗議活動週四早進入第三天，有未經證實報導警察在蘇伊士港口城市“屠殺“平民。
In Cairo, protesters "played cat and mouse with police" into the early hours of Thursday, Reuters reported. Opposition groups reported on their websites that electronic communications had been cut off in the city center, and parts of the city were experiencing blackouts.
在開羅，示威者“與警察玩貓捉老鼠“至週四凌晨，據路透社報導。反對派團體在網站上報導，在市中心的電子通訊已被切斷，和部分城市正在經歷消息封鎖。
The official death toll stood at six over the first two days of protests, but social networks were abuzz with claims of police shooting at protesters, many of those reports focusing on the city of Suez, where protesters torched a government building on Wednesday.
在首兩天的抗議官方公佈的死亡人數停在六人，但社交網絡議論紛紛，有宣稱警察射擊示威者，許多那些報告都集中在蘇伊士城，在那裡示威者星期三縱火焚燒政府大樓。
"Security forces are committing heinous massacres and there is zero media coverage," read an update on the web page of Suez from Egyptian Association for Change - USA, an opposition group that had joined the call for an uprising starting on January 25.
“安全部隊犯下令人髮指的大屠殺和沒有媒體報導，“蘇伊士來自埃及改變協會-美國 的更新網頁讀到 ，它是一個反對派團體已加入呼龥開始於1月25日的起義。
"Government is trying to cover up what happened in city of Suez. Media banned from entry," read another update. "Reporters from Suez, Al Jazeerah, Dream and Al Mehwar were prohibited from entering Suez to enforce a media blackout on the subject."
“政府正在試圖掩蓋在蘇伊士城發生的事，媒體被禁止進入，“另一處更新閱讀。 “從蘇伊士來的記者，Al Jazeerah，夢想Dream 和 Al Mehwar都被禁止進入蘇伊士，以執行對這一問題的媒體封鎖。“
Others reported on the web page that a curfew was placed on the city and police were using "live ammunition."
其它的網頁報導有城市實施宵禁和警察使用“實彈。“
Yet another update asserted that communications and electricity in Suez had been completely cut off, something also asserted by the We Are All Khaled Said protest group, which didn't report a "massacre" but did warn of an impending one.

Suez is completely cut off. Police has been evacuated. Protesters there are very angry. The army is being brought in according to reports. Some sad speculations say that a massive crackdown will take place in Suez on protesters which could end up with a REAL Massacre.
Some 130 people were reportedly injured in clashes between protesters and police in Suez on Wednesday. Officials confirmed that more than 1,000 people have been arrested in protests around the country.

Anti-government protesters appeared to be encouraged by news that Mohamed El-Baradei, a former chief UN weapons inspector and prominent figurehead for Egyptian opposition groups, would be returning to the country amid the protests.

Others noted a significant "shift in tone" in Washington towards the government of President Hosni Mubarak, whom the US has long supported with billions in foreign aid. Reuters reported:

The United States bluntly urged Egyptian President Hosni Mubarak on Wednesday to make political reforms in the face of protesters demanding his ouster, in a shift in tone toward an important Arab ally.

In issuing a fresh call for reforms after a day of clashes between Egyptian police and protesters, Washington appeared to be juggling several interests: its desire for stability in a regional ally, its support for democratic principles and its fear of the possible rise of an anti-U.S. Islamist government.

Although Western observers have been cautious thus far not to declare the protests a Tunisia-style uprising, the mood among opposition groups suggested they believe that this is a seminal moment in Egyptian history.

"Egyptians' desire for freedom has reached the point of no return," We Are All Khaled Said declared. "Egyptians have said their word. They want change ... freedom and justice ... There is no coming back. They had their chance."

"Protesters are being released. They say will not stop. Change has come to Egypt. There is no going back. The people have spoken and their demands must be met," the Egyptian Association for Change declared.

新聞記者遭攻擊
JOURNALISTS UNDER ATTACK
The protests in Egypt have taken a particular toll on reporters covering the conflict, with the Committee to Protect Journalists reporting that security personnel beat at least 10 reporters in the first two days of protests.

Egyptian authorities have blocked access to at least two websites of local online newspapers: Al-Dustour and El-Badil, the CPJ stated.

Other protesters and I were thrown through the doorway, where we had to run a gauntlet of officers beating us with sticks. Inside we were pushed against the wall; our mobiles and wallets were removed. Officers walked up and down ordering us to face the wall and not look back, as more and more protesters were brought in behind us. Anyone who turned round was instantly hit.

An Associated Press cameraman and his assistant were arrested while filming clashes between protesters and police in Cairo on Tuesday, the first day of protests, and had not been released as of this report.

State Department spokesman P.J. Crowley said the US was putting pressure on Egypt to release the AP staffers. "We have raised this issue already with the ministry of foreign affairs and we will continue to monitor these cases until they are successfully resolved," he said.