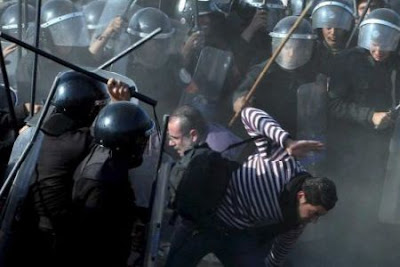 An Israeli minister says Egyptian government forces will have to exercise force to rein in public protests as the African country is teetering on the brink of a Tunisia-style revolution.
一名以色列部長說，埃及政府部隊將要行使武力遏制公眾示威活動，因該非洲國家正在搖搖欲墜邊緣仿效突尼斯式革命。

Inspired by the recent popular revolution in Tunisia, which resulted in the historic overthrow of the country's President Zine El Abidin Ben Ali, Egyptians have staged similar anti-government protests since Tuesday, calling on President Hosni Mubarak to relinquish power after three decades in office.
由最近在突尼斯流行的革命啟發，它導致歷史性推翻該國總統宰阿比丁本阿里，埃及人自星期二已出現類似的反政府抗議活動，呼籲總統胡斯尼穆巴拉克在三十年的主政後放棄權力。
Meanwhile, an Israeli cabinet minister who spoke on condition of anonymity to Israeli media stated on Thursday that the Egyptian president backed by a strong militarily prowess will eventually subdue the crisis, The Washington Post reported.
與此同時，一位以色列內閣部長週四以不透露姓名條件對以色列媒體表示，埃及總統背後有強大的軍事實力會最終制服危機，華盛頓郵報報導。
"His regime is well-rooted in the military and security apparatus," said the Israeli minister, adding that, "They will have to exercise force, power in the street and do it. But they are strong enough according to my assessment to overcome it."
“他的政權是良好地植根於軍事和安全機構“以色列部長說並補充，“他們將要在街上行使武力、權力和做它。但他們足夠強大去克服它，根據我的判斷。“
Egypt, which is widely regarded as the first Arab country to seal peace agreement with Israel three decades ago, remains one of Tel Aviv's most important allies.
埃及是被廣泛認為是第一個阿拉伯國家，三十年前與以色列簽定和平協議，仍然是特拉維夫其中之一最重要的盟友。
On Thursday, Israel's Deputy Prime Minister Silvan Shalom told reporters that Tel Aviv is closely watching the still-unfolding situation in Egypt, and does not see a threat in its ties with the African nation.

He made the remarks as tens of thousands of Egyptians marched in Cairo and a string of other cities to protest against the 82-year-old Mubarak.

In the city of Suez, along the strategic Suez Canal, protesters set ablaze a fire station and stole weapons that they then turned on police.

Meanwhile, Egyptian security forces took up positions in strategic locations, including Cairo's Tahrir Square, site of the biggest demonstrations this week, raising fears that the government would mount its crackdown on demonstrators.