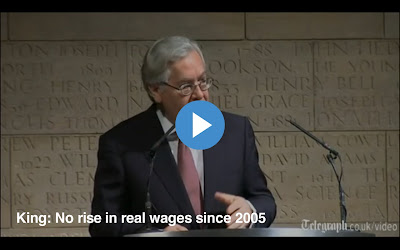 Households face the most dramatic squeeze in living standards since the 1920s, the Governor of the Bank of England warned, as he reacted to the shock disclosure that the economy was shrinking again.
家庭面臨自1920年代以來最戲劇性的生活水平擠壓，英國央行行長警告，當他反應震驚的披露經濟再次萎縮。
By Robert Winnett, Deputy Political Editor
9:41PM GMT 25 Jan 2011
Translation by Autumnson Blog

Families will see their disposable income eaten up as they “pay the inevitable price” for the financial crisis, Mervyn King warned.
家庭將看到他們的可支配收入用光，因為他們為金融危機“付出必然的代價“，默文金警告。
With wages failing to keep pace with rising inflation, workers’ take- home pay will end the year worth the same as in 2005 — the most prolonged fall in living standards for more than 80 years, he claimed.
隨著工資未能跟隨上升通脹的步伐，工人拿回家的薪水將在今年年底價值會如2005年一樣 - 生活水平最長時間的下降在超過80年，他聲稱。
Mr King issued the warning in a speech in Newcastle upon Tyne after official figures showed that gross domestic product fell by 0.5 per cent during the final three months last year. The Government blamed the unexpected reduction — the first since the third quarter of 2009 — on the freezing weather that paralysed much of the country last month.
金先生在紐卡素於一次講話發出警告，在官方數字顯示國內生產總值在去年最後三個月下降百分之零點五後。政府歸咎未能預料的減少 - 自2009年第三季度以來的第一次 - 在冰凍天氣那在去年最後一個月癱瘓大部分地區。
But there were fears that the country was poised to slip back into recession, defined as two successive quarters of negative growth. Economists said the situation was “an absolute disaster”.
但有擔憂該國正在準備重新陷入衰退，定義為連續兩個季度的負增長。經濟學家說情況是一“絕對的災難“。
The economic gloom deepened this morning as figures showed that mortgage lending by the major banks dived to an 11-and-a-half-year low during December.
經濟頹勢在今天早晨加深，當數字顯示主要銀行的按揭貸款在十二月潛至11年半的新低。
Net lending, which strips out redemptions and repayments, fell to £880 million during the month, the lowest level since June 1999, according to the British Bankers' Association.

Labour has accused ministers of jeopardising recovery by pushing ahead with public spending cuts too quickly.

Mr King said he was unable to offer any imminent hope of a rise in interest rates in coming months because of the poor economic outlook. Savers and “those who behaved prudently” would be among the biggest losers in the squeeze, he admitted.

Disposable household income has been hit by sharp increases in the cost of food, fuel and tax, coupled with restricted wage rises for most workers. Last year, take-home pay fell by about 12 per cent, official figures showed, and the trend was expected to continue in 2011.

The governor warned that the Bank “neither can, nor should try to, prevent the squeeze in living standards”.

He said that the economic figures were a reminder that the recovery will be “choppy”. However, he said the biggest threat facing the Bank’s Monetary Policy Committee, which sets interest rates, was rising inflation.

The Bank is expected to use interest rates to keep inflation below two per cent, but the governor said inflation could rise “to somewhere between four per cent and five per cent over the next few months”.

He claimed that rising inflation had been caused largely by increases in global oil and commodity prices, and tax rises such as the increase in VAT introduced at the beginning of the year, which the Bank was powerless to control.

“The squeeze on living standards is the inevitable price to pay for the financial crisis and subsequent rebalancing of the world and UK economies.”

Mr King insisted that the Monetary Policy Committee could not have increased interest rates from their current record low level to tackle the rise in inflation.

“If the MPC had raised the Bank Rate significantly, inflation might well have started to fall back this year, but only because the recovery would have been slower, unemployment higher and average earnings rising even more slowly than now,” he said.

“The erosion of living standards would have been even greater. The idea that the MPC could have preserved living standards, by preventing the rise in inflation without also pushing down earnings growth further, is wishful thinking.”

He added: “Monetary policy cannot be based on wishful thinking. So, unpleasant though it is, the Monetary Policy Committee neither can, nor should try to, prevent the squeeze in living standards, half of which is coming in the form of higher prices and half in earnings rising at a rate lower than normal.”

“The Bank of England cannot prevent the squeeze on real take-home pay that so many families are now beginning to realise is the legacy of the banking crisis and the need to rebalance our economy.”

The comments represented one of the governor’s starkest warnings yet. His claim that the banking crisis was behind the ongoing squeeze on living standards comes at a sensitive time, as banks prepare to announce multi-million pound bonuses for their executives.

Mr King expressed sympathy for savers and highlighted the failure of lenders to pass on cuts in interest rates. “I sympathise completely with savers and those who behaved prudently now find themselves among the biggest losers from this crisis,” he said. “But a return to economic stability from our fragile condition will require careful and well-judged steps looking beyond the next few months.”

Addressing the problems of borrowers, he added: “Households and small businesses with little housing equity may be unable to borrow at all or are able to borrow only in the unsecured market – where rates are much higher than before the crisis.”