DISCLAIMER: It has come to our attention that the alleged newspaper article originally included in this post needs further investigation therefore we have removed it from the post.
However, at this point, we remain confident that our source is reliable and this story is true. All testimonies from God, like gifts, are received by faith. The choice is yours to believe
免責聲明：我們注意到據稱的原先報紙文章包括在這帖中的需要進一步調查，所以我們已從帖中移除它。
然而，在這一點上，我們仍然有信心我們的來源是可靠的，和這個故事是真實的。所有從神而來的見證，如禮物，是靠信仰收到的。信與不信是你的選擇 。

A nurse is leading a mission team of doctors and nurses to Brazil. They left on Jan 13, 2011. They are still there until the 28th. On the 12th there had been massive flooding in Brazil and over 600 people died. They were not going for this reason but the timing of their trip just happened to coincide.
一名護士正領導一個醫生和護士的志願隊伍往巴西，他們在2011年1月13號離開，直到28日他們還在那裡。 12日在巴西發生大規模的洪水和超過 600人死亡。為這原因他們沒有起行，但他們的行程時間剛好碰正。
Only one on the team had ever experienced the power of the Holy Spirit or miracles for that matter!! She had asked her friends to pray, and they did.
隊裏只有一位曾經歷聖靈的權力或與那有關的奇蹟！她已曾要求她的朋友們祈禱，和他們做了。 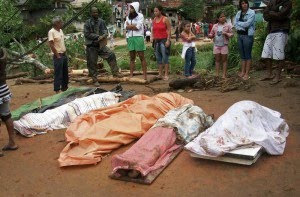 Her friend had sent her a small e-mail on the 13th with a small word, and she had mentioned how blessed the team was by it. So the next night, the friend sent her another e-mail, and she told her that when she read the e-mail to her team in chapel on Saturday the 15th in the morning, one by one the team members fell under the power of God. They lay there, unable to move for over an hour while someone reread the e-mail over them, over and over and over.

She said the e-mail had released so much faith to them that just at the end of the chapel time, when the Holy Spirit told them to “Go to the morgue, NOW!” they immediately obeyed. What happened in the morgue and on the street near the morgue is almost incomprehensible and hard to imagine but she talked to her friend on Sunday morning and got the incredible, play-by-play details.

After chapel on Saturday morning when they fell under the power, the team went out into the streets and the morgue and raised 16 people who had died in the floods 3 days earlier from the dead.

Attached is the local newspaper article (translated below) from the area in Brazil where this happened. The article was published Sunday, 1/16/11.
附寄的是巴西地區的本地報紙文章（翻譯如下），在那地方發生這情況。文章在1/16/11星期天發表。
The testimony is below from the pictures attached and the newspaper article printed on Sunday morning! Read on.

Below is the English translation of the local newspaper article with the documented interviews of two of the people that had been risen from the dead:
下面是本地報紙文章的英文翻譯，有兩名從死裡復活的人的採訪記錄：

CALEME, TERESOPOLIS, Brazil – People of the barrio of Caleme have witnessed Saturday 5 dead bodies raised from the dead in the street. Another 10 bodies from the morgue have been raised to life. One woman who drowned and was dead was also raised back to life. The people in Caleme reported that 5 American men went near the 5 bodies and yelled, “Rise and live in the name of Jesus.” The dead bodies started to shake and stood up and walked and are alive. At the nearby morgue, there were 10 dead bodies in the hallway. People said that 5 foreign women went near the bodies and said, “Rise and live in the name of Jesus.” The dead bodies shook and stood up shaking and walking and were alive. People were screaming, yelling. Riot at the barrio of Caleme.
These 5 dead bodies in the street of Caleme have been dead since Wednesday January 12. The 10 dead bodies in the morgue have been left in the hallway since Wednesday. People have talked to the dead risen. They were still weak but were able to talk and they said, “I was in a dark place many people crying, shouting. Was I asleep? Now I am alive!” “I know I was dead. I was in a dark, ugly place. I do not know what happened, but I am back to life. God is alive.” The families of these dead are celebrating and happy. There has been hope in Caleme since Saturday.
巴西TERESOPOLIS的CALEME - Caleme的西班牙語人聚居地的人們已在星期六目睹五具屍體在街上從死裡復活，另外十具屍體已從停屍房復活，一名淹死的婦女亦已恢復生機。Caleme的人們報告，五名美國男子走近五具屍體及大喊：“奉耶穌的名字起來。”屍體開始搖動、站起、行走、而且是活著的。在附近的停屍間，有十具屍體在走廊，人們說有五名外國婦女來到屍體的附近及說：“奉耶穌的名字起來。”屍體搖晃、站起、行走和都是活著的。人們在尖叫及大喊，騷亂發生在Caleme的西班牙語人聚居地。
五具在Caleme街上的屍體自1月12日星期三已是死亡，十具在停屍房的屍體自上週三以來已被留在走廊。人們已對復活的人傾談，他們仍然虛弱但能夠步行及他們說：“我在一個黑暗的地方，許多人在喊和叫。我睡著了嗎？現在我是活著的！“”我知道我曾死去，我在一處黑暗、醜陋的地方，我不知道發生什麼事，但我重獲生機，上帝是活著的。“這些死者的家屬在慶祝和高興，自星期六Caleme一直滿有希望。
ARTICLE REMOVED for further investigation.
文章被移除作進一步調查。

Here are the details that my friend gave me over the phone about the pictures attached to the article.

The link below is to a picture (in color) of the five bodies that died in the floods on Jan. 12, 2011. It was taken on the day that they died. This picture was taken 3 days before they were raised back to life on January 15, 2011. My friend told me those bodies were lined up along the side of the road and left there for three days until when on Jan. 15, 5 men from their medical mission team, came upon them and not knowing exactly how to raise the dead, the team decided to just stand there and worship the Lord over the bodies (this is what my friend told me but the news article says differently). As they worshiped, the bodies began to shake and tremble and began to sit up and stand. Instantly, the people all around began to shouted and screamed, and within in a few seconds there was chaos and a mob of people. This picture matches exactly to the top picture you see in the newspaper article attached.

This link below will take you to that picture but you have to scroll down a bit to see it. It’s in the right hand column. To make it easier for you, we attached a screen capture above. It is the same picture used in the newspaper article that was written about that day. The pictures are both date stamped. Incredible.

The second (or bottom) picture in the newspaper article appears to be the leftover pile of dirty blankets that were used to cover the 10 dead people in the morgue who were waiting to be buried but then raised from the dead instead. These bodies all had been dead for three days as well, due to drowning in the floods. The other five members of the medical missions team had entered the morgue under the Holy Spirit’s leading. He had given them the number 16 but they were not sure what that meant.

They stood to the back of the room, amongst the family members who were grieving and mourning their losses and the 5 ladies from the mission team linked hands. As they did, they began to shake under the power of God. They felt the Holy Spirit give them the words to say and all together they shouted it: “RISE UP AND LIVE IN THE NAME OF JESUS.” The leader told me that their voices were not their own and that “somewhere in our bellies” came a thundering voice in one accord, as if they had shouted through a megaphone.

They waited and within five seconds, one body began to shake as if “someone had been stomping on them” and then one by one all the bodies were shaking. Each body then began to slowly sit up, and then stand. The grieving family members began to shout and scream wildly and in an instant there was chaos in the room. The interpreter quickly ushered the team out of the building for their safety. They met up with the other team members that had been walking the street and had just raised the other 5 to life. That team had also come across a dead body that had been more of a recent death and decided to try CPR. Just as they were going to do CPR, the Holy Spirit told the team leader, “Do not do CPR! Command the body to rise and live.” So they did and that body began to shake and sit up. That person was also raised from the dead.

First published on the website of Bethel Church, Redding, CA.