Hong Kong Free Press:
The Telegram groups cited by police appeared to have been set up recently, with few followers and were registered using Mandarin - as used in mainland China.

“Can you guys be more professional and use Cantonese romanisation so that this group does not look so fake?” one sceptical Telegram said.
====
香港示威者反撃警方宣稱在中國國慶日計劃'殺警員,炸商埸'
Hong Kong protesters hit back over police claims they plan to ‘kill officers, bomb malls’ on China National Day


Hong Kong protesters have challenged intelligence presented by the police force claiming that some demonstrators were planning to kill officers, set fires and bomb shopping malls on Tuesday – China’s National Day.
Police Public Relations Branch Chief Superintendent John Tse said during a 4pm press conference on Monday that the force received intelligence that “core rioters” were planning attacks on Tuesday. He presented several posters that he claimed could be found online: “Rioters are planning to do serious damage to shopping malls,” Tse said. “Some shameless people are recruiting those with suicidal thoughts to plan and execute incidents of mass casualties.” 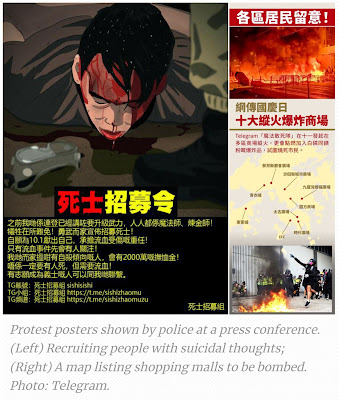 “This intelligence made us very worried. The police hope this intelligence will not become a reality. But we have made all the preparations we can,” he said. Tse added that the risk of Hong Kong experiencing terror attacks remained at a medium level.
The posters Tse displayed were previously reported in pro-Beijing newspapers including Sing Tao Daily, Ta Kung Pao and Wen Wei Po. 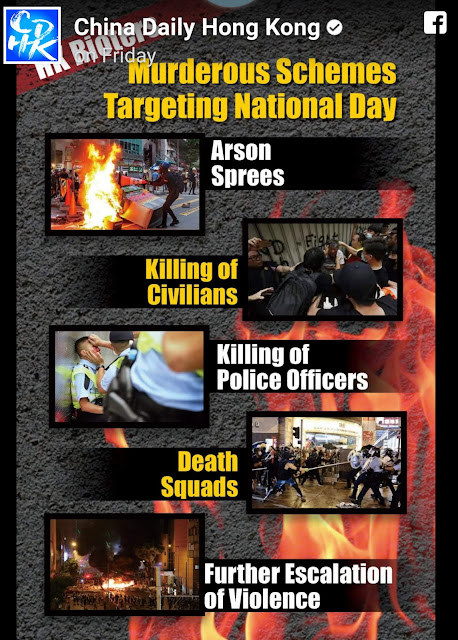 Hong Kong is bracing for an escalation of violence as anti-government fanatics are baying for blood in the run-up to the Oct 1 National Day.
Schemes to kill police officers and civilians are being planned and discussed by militant radicals, according to local Chinese-language newspaper Wen Wei Po.
Murder plots include the killing of civilians by rioters masquerading as police officers and the fatal ambushing of officers on patrol.
...See more


However, protesters have questioned the veracity of the intelligence.
A poster showed three Telegram messaging app links, including a personal account – @sishisishi – and a group @sishizhaomu, as well as an information channel, @sishizhaomuzu. All three were registered using Mandarin, the language used by the majority of people in mainland China but not in Hong Kong.
“Sishi” means people who are ready to make sacrifices, whilst “zhaomu” means “recruit” and “zu” means “group.” The @sishizhaomuzu channel. Photo: Screenshot.
The poster claimed HK$20 million would be given to a person with suicidal thoughts who agreed to cause bloodshed.
The @sishizhaomu group was created on September 25, but the administrator has never spoken in the group. 222 people had joined as of 7pm Monday, but the group was filled with messages from protesters questioning the group’s motive.
“Can you guys be more professional and use Cantonese romanisation so that this group does not look so fake?” one said.
“Stupid corrupt cops – zhaomuzu? Who are you kidding?” another said.
The @sishizhaomuzu channel – for broadcasting messages en masse – was also created on September 25 and only sent one message at around 3pm on Monday. The channel had 143 subscribers as of 7pm Monday. John Tse. File Photo: inmedia.net.
Reminder612, a channel made by protesters to send out information – with over 130,000 subscribers – said there were rumours that the recruitment accounts asked for personal information from protesters. It requested Hong Kong identity card numbers on the basis that the protesters may be arrested, they said.
In the poster claiming that bombs will be used at shopping centres on Tuesday, the locations of some of the malls mentioned were incorrect.
Protests in Hong Kong have entered their 17th week. They first began with large-scale peaceful protests in June against a bill that would have enabled extraditions to China. But the demonstrations have evolved into sometimes violent displays of dissent over Beijing’s encroachment, democracy and alleged police brutality.
Police have banned a Civil Human Rights Front demonstration on Wednesday, and sent SMS messages to residents warning them of potential unrest. File Photo: Studio Incendo.
A press release from the government also warned citizens not to participate in any protests:  “The dangerous acts of extremely violent protesters have become more severe recently to involve highly dangerous actions such as hurling petrol bombs, setting fires and posing an extreme threat to the personal safety of the public. According to online information, unauthorised public order events are very likely to take place in various districts in Hong Kong, which may cause severe disruptions. Members of the public are reminded to remain vigilant and mind their own safety,” a spokesman said.
Use of force
Meanwhile, the police use of force was questioned at the press conference after a video of police behaviour on Sunday was widely shared.


An officer of the special tactical unit, commonly known as “raptors,” subdued a protester in Admiralty, who was lying on the ground with a bag covering his head.
An officer was kneeling over the protester in a shooting position with a projectile gun. Footage showed the officer appearing to use the protester’s back to support their rifle.
“Why does [the officer] kneel on the protester’s body/arm? Why does [the officer] use the protester as a human shield?” asked Jacky Yu, a writer whose post was shared almost 5,000 times.
Police Public Relations Branch Senior Superintendent Kong Wing-cheung denied that the officer was using the protester as a human shield. He said the officer was very busy, and therefore had to maintain a shooting position whilst subduing the protester at the same time.
“The officer was in a shooting position because there was danger at the scene in front of him,” Kong said.
The force said that 328 canisters of tear gas, 306 rubber bullet rounds, 95bean bag rounds and 79 sponge grenades were fired on Sunday, with 157 people arrested.
Legal action
Questions have been raised over the plight of pro-democracy lawmaker Eddie Chu, who was pepper-sprayed in the face by a police officer in Causeway Bay on Sunday, without any prior warning. Eddie Chu. Photo: inmediahk.net.
Chu said at a press conference on Monday that he felt difficulty breathing after he was sprayed.
He said he has asked his lawyer to send a letter to the police chief to ask for the details of the officer who sprayed him, and to reveal their code of operations. Chu said he would not rule out filing a judicial review to force the police to reveal the information.