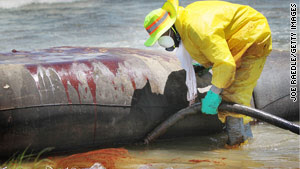 Nasa新報告發現近50%墨西哥灣沿岸人口正在經歷疾病,指示性與BP石油洩漏有關的化學品中毒
New report from NASA finds that nearly 50 percent of the population along the Gulf Coast is experiencing sickness indicative of chemical poisoning related to the BP oil spill
March 12, 2011 – 9:43 am
Translation by Autumnson Blog

Along the Gulf Coast, the marketing blitz for spring break is rolling out as the oil from the BP blowout 11 months ago continues to roll in along with increasing numbers of dead infant dolphins, in numbers completely without precedent. The beaches remain polluted with toxic oil and dispersant even as local politicians and government officials insist everything is fine and the oil miraculously gone. Thousands of pounds are collected each day from the few areas that remain under scrutiny, all of those being in highly visible resort areas. In one zone on Ft. Morgan beach in Alabama, a record 17,000 lbs was collected in one day after a winter storm rolled through. Along the beaches of Alabama in areas not frequented by media or guests, dead infant dolphins are left uncollected in the sand. Current plans by mayors of resort communities along the Gulf Coast will have thousands of vacationers, including at-risk populations, once again making sandcastles and sunbathing on toxic, polluted beaches.
在墨西哥灣沿岸，春假營銷閃電戰正在推出，當11個月前BP油井噴出的石油有越來越多的幼兒海豚死亡湧現，數量上完全沒有先例。海灘仍然被有毒油和分散劑污染，甚至當本地的政治家和政府官員堅持，一切都很好和油污奇已蹟般地消失。每天有數千磅的收集來自幾個仍然受到仔細觀察的地區，全是在那些被高度可見的度假區。在阿拉巴馬州摩根堡海灘上的一個區域，創紀錄的17,000磅在一天之中被收集，在一個冬季風暴通過後。沿阿拉巴馬州海灘的區，不是媒體或訪客常去的，死的嬰兒海豚被遺棄在沙灘上。目前由墨西哥灣沿岸度假區市長的計劃，將吸引數以千計的度假者，包括高危人群，再一次在有毒、污染的海灘上做沙堡和日光浴。
BP continues to shut down the few cleanup efforts still underway with the approval of the federal government. At the Gulf Coast Ecosystem Restoration Task Force meeting in New Orleans recently, scientists, NGO’s, and concerned citizens demanded to know how the ecosystem could be restored when the basic cleanup of the oil has been made impossible by any known technology after the dispersant sank it to the ocean floor. Health concerns remained at the forefront of dialogue as a new report by the Louisiana Bucket Brigade finds that nearly 50 percent of the population along the Gulf Coast is experiencing sickness indicative of chemical poisoning related to the BP oil spill. The CDC assertions in a brochure distributed at the meeting that the levels of chemical exposure related to the spill are not a cause for concern was ridiculed and an embarrassment to many of the officials present.
BP繼續關閉幾項仍在進行中有待聯邦政府批准的清理工作，在墨西哥灣沿岸生態系統的恢復專責小組最近在新奧爾良會議，科學家、非政府組織和有關人士要求知道，生態系統如何能被恢復，當分散劑沉到海後底，基本的石油清除以任何已知的技術已是不可能。健康關注仍然是處於對話的前列，因為由路易斯安那州桶團隊的一份新報告發現，沿墨西哥灣沿岸地區近50%的人口正在經歷疾病，指示性與BP石油洩漏有關的化學品中毒。疾病預防控制中心在會上分發的小冊子中斷言，有關洩漏的各級化學品接觸並不是一個令人關注的理由，受到嘲笑和對許多的出席官員帶來尷尬。

Orange Beach, Alabama, March 3, 2011
Government data collected during the oil spill last summer, which is now being released by one of the scientists on the NASA team, strengthens claims that oil and dispersant was brought onshore in rain during the spill. The Chief Mission Coordinating Scientist on the NASA remote sensing mission to the BP oil spill in the Gulf Of Mexico was Ira Leifer, Ph.D from University of California Santa Barbara. Dr. Leifer has been working with natural oil spills and natural methane bubble flows for the last decade. He is in the process of releasing some of the government data collected during the spill; the vast majority of this data has been suppressed and is not available to scientists, the media, or the general public. The data was collected on boats at the sea surface, in airplanes over the Gulf, and by satellite.
The data being released, which was collected by the NASA missions to the Gulf, shows that the toxic compounds released from the BP spill became airborne, and significant quantities were brought onshore by precipitation, thereby exposing coastal populations to chemical poisoning. This represents something new and unique not observed in previous oil spills. It helps explain why there were numerous reports by people living along the Gulf Coast that it was raining oil and dispersant during the summer months.
Ira Leifer at work/Photo by George Foulsham
After spending some time together in New Orleans I spoke to Ira Leifer at length in Mexico City.
JC: How was the data you are referring to collected, and based on that data, what degree of concentration did you find of what you would consider toxic compounds?
JC: What about the population along the coast in the areas where there have been so many reports of people complaining of health problems, specifically Southern Louisiana, Mississippi, the Orange Beach/Gulf Shores area of Alabama? Do you think the data you collected has a direct correlation to those populations and what they were inhaling?
IL: People in the Gulf of Mexico were not warned that the air was going to be bad and they had clean air in much of the area right before the spill. It is a very different kind of situation than people who chose to go and try to make money in Mexico City. A lot of people in the Gulf live there because they enjoy the Gulf and they didn’t want to move Los Angeles or New York City or the big American polluted environments — they chose to stay where the environment is pretty clean.
In terms of the health implications for coastal communities I think there are two things. I have classified there being three different approaches by which atmospheric phenomenon related to the oil spill can cause health effects. One is the volatiles just breathing the stuff a long way from the incident site. A second one is aerosol, so when oil comes up on the beaches as the wave breaks there is aerosol generated in the air, and that can be breathed by people. The last one which we discovered is the rain. I will add a fourth one which is dispersants. Clearly, spraying dispersants near populated areas is a bad idea. If dispersants are aerosolized that is a bad thing as well. I do not have data on the dispersants so I will speak to what I do know. With regards to the volatiles there are two things the main thing is that volatiles can go a long way on the wind.
read full news from www.huffingtonpost.com