新極光之謎：在對挪威的天空這是怎麼回事！？
New Aurora Mystery: What is going on in the skies over Norway!?
2010 01 28
By Ian O'Neill
DiscoveryNews.com 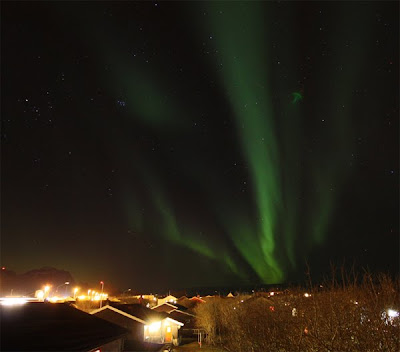 Jan. 26, 2010 -- This was the view looking over the small town of Andenes, Norway, on Jan. 20. Snaking across the sky from horizon to horizon was a dynamic green aurora, signaling to the inhabitants of Earth that the sun was spraying us with an intense stream of energetic particles.
2010年1月26日 - 這是1月20日在挪威小城鎮安德內斯上空的景觀。從地平線到地平線蜿蜒劃過天空是一個動態的綠色極光，給地球居民訊號，太陽對我們噴灑濃烈的高能粒子流。 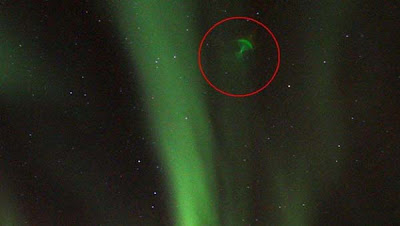 On Jan. 20, 2010, Per-Arne Mikalsen was photographing a vast aurora erupting over the northern Norwegian town of Andenes.


Because solar activity is on the increase, aurora spotters have many opportunities to see the Northern Lights. On this particular night the aurora was intense, stretching toward the southern latitudes of Norway.

In one of the photographs taken by Mikalsen was an "object" that couldn't be identified. Although Mikalsen had taken several images at the same location, just one photo showed a mysterious green parachute-like object hanging with the main aurora. (This time, it appears that the Russian military was not involved in the making of this strange shape in the sky.)

At first it seemed easy to dismiss the object as a lens flare or a spot on the camera lens, but after further study it became clear that the answer wasn't that simple.

Also, Mikalsen is no stranger to aurorae, having worked on Andøya Rocket Range (on the island of Andøya) for many years. He's seen aurorae of all shapes and sizes, but he'd never before seen a structure like this hanging in the sky.

"I have been working the Andøya Rocket Range for 25 years (the 20 last years in the management) and I have become more and more fascinated by the aurora," Mikalsen told Discovery News. "Photography is a hobby for me."
According to Mikalsen, as soon as he posted his aurora photographs on the Spaceweather.com Northern Lights Gallery, he received dozens of emails from all over the world requesting more information about the mysterious shape.

So what could it be? In correspondence with Truls Lynne Hansen, lead scientist at the Tromsø Geophysical Observatory, he doubts that the mystery object can be explained by a technical fault.

"Usually such aberrations appear when there is a small and intense source of light in the field of view, or at least so close that the light from it hits the lens," Hansen explained to me via email. "That seems not to be the case here."
"Additionally the color of the 'phenomenon' is the same as the color in the aurora, the auroral green line from atomic oxygen," Hansen continued, "so the 'phenomenon' is either a genuine auroral feature or a reflection of auroral light somewhere in space."
“另外那現象'的顏色'是相同於極光的顏色，由原子氧來的極光綠線，”漢森繼續說，“因此那'現象'一係是一個真正的極光面貌，一係就是在太空某處的極光反射。

Hold on. A reflection of auroral light... in space? That's impossible.
“等等，一極光的反射...在太空？那是不可能的。

Or is it?
抑或它是嗎？
The structured shape of the phenomenon, plus its distance from any light sources, seems to indicate that this isn't an equipment problem. There is also no known aurora that could do this naturally. So that leaves the "reflection from space" argument. What do we have in space that could possibly reflect the green light being emitted by the aurora?
現象的結構形狀，加上其和任何光源的距離，看來指出這不是一個儀器的問題。那裡亦沒有已知的極光能夠自然地做到這一點。因此遺下了“從太空來的反射”爭論，我們在太空有什麼可能反射極光放出的綠光呢？
"I agree with Pål Brekke [Senior Advisor at the Norwegian Space Centre] that a reflection from a satellite is a candidate," said Hansen. "It reminds of the so-called 'Iridium flares' -- reflections of sunlight from the regularly shaped Iridium satellites."

Satellite flares are well known by astronomers. As a satellite passes overhead, the conditions may be right for the spacecraft's solar panels or antennae to reflect sunlight down to the ground. The result is a short-lived burst of light, known as a "flare."

The network of Iridium communication satellites are best known for their flares, since they have three huge door-sized antennae that act as orbital mirrors. Witnessing an Iridium flare is immensely rewarding; the event can be predicted beforehand because these satellites have orbits that can be tracked.

My personal concern about the satellite flare theory is the question about auroral light intensity. Is the light from a large aurora bright enough to bounce off a satellite and appear as an auroral satellite flare as a point? And in turn produce a parachute-shaped, lens flare-like projection in the photo? I couldn't imagine even an Iridium satellite amplifying auroral light that much (although a stonking-huge orbital solar power array of the future might do a better job).

"The intensity of an intense aurora is not far from the intensity of moonlight, which is 1/100,000 of sun's light, and the solar Iridium flares apparently are several orders of magnitude stronger than this 'auroral flare,' so the intensity does not immediately exclude the satellite reflection hypothesis," said Hansen. 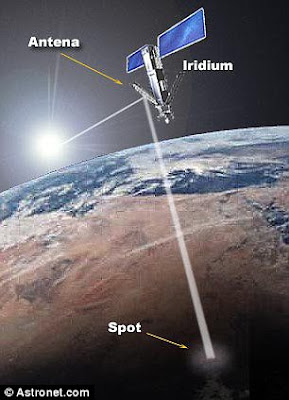 How an Iridium flare works with sunlight, but the same should be true for other light sources, such as aurorae (astrosat.net)

"The intensity of an intense aurora is not far from the intensity of moonlight, which is 1/100,000 of sun's light, and the solar Iridium flares apparently are several orders of magnitude stronger than this 'auroral flare,' so the intensity does not immediately exclude the satellite reflection hypothesis," said Hansen.

A weak auroral flare seems feasible, but as pointed out by astronomer Daniel Fischer via Twitter, the green flare might not have anything to do with reflected aurora light, it could just be the color of the lens coating. The lens flare was therefore the result of internal reflections inside the camera lens caused by the bright lights in the lower left-hand corner of the frame.

"It has the typical caustic shape and it is opposite several bright point lights," Fischer observed. "Green color could be caused by lens coatings.
"Although more research will need to be done, it certainly seems plausible that Per-Arne Mikalsen serendipitously took a photograph of a satellite flare (possibly an Iridium satellite).
雖然將需要做更多的研究，它肯定看來合情合理Mikalsen無心插柳，拍了一幀衛星火光的照片（可能是銥星衛星）。
What makes this revelation even more exciting is that we've never seen an auroral reflection from a satellite before (if it's not a lens flare, that is).
"I have, by the way, never seen or heard of a similar phenomenon," Hansen said. 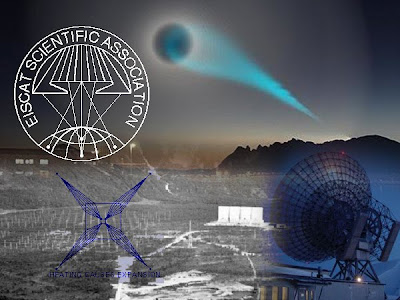 Pal Brekke, senior adviser, at the Norwegian Space Centre, told the Mail Online: 'A reflection from streetlight would be the most straightforward explanation.
'But why is it green? One should think it would be white or yellow if it was a reflection from the streetlight.
'So while I am not yet fully convinced it was a satellite - one cannot rule this out.'
If proven it will be the first known case of a satellite reflecting the Northern Lights. 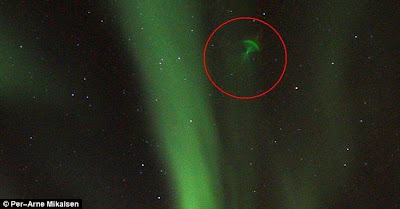 Mr Mikalsen captured this strange phenomenon he described as a 'parachute' when taking pictures of the vivid Aurora over Andenes, Norway 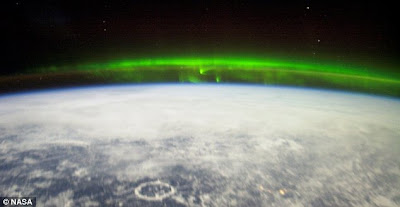 The Aurora Borealis or 'Northern Lights' as seen by the International Space Station. Some experts believe the aurora can be reflected off satellites like an iridium flare 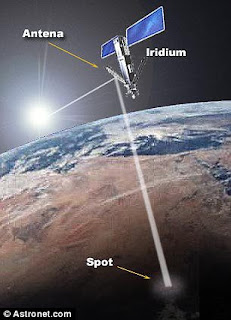 Iridium satellites have three main antennas. When at a certain angle the Sun's reflection from one such antenna produces a small spot on the surface of the Earth around 6.25miles in diameter. This moves as the satellite and the Earth move. Someone within this area on Earth can observe iridium flares or flashes in the sky