水蒸汽是'全球變暖和變涼的主因'
Water vapour a 'major cause of global warming and cooling'
By David Derbyshire
Last updated at 7:47 AM on 29th January 2010

Climate scientists have overlooked a major cause of global warming and cooling, a new study reveals today.
氣候科學家忽略了一個全球變暖和冷卻的重要原因，一項新研究今天透露。
American researchers have discovered that the amount of water high in the atmosphere is far more influential on world temperatures than previously thought.
美國研究人員已發現，高至在大氣中的水是比以前想像中，更遠遠影響世界的溫度。
Although the findings do not challenge the theory of man-made global warming, they help explain why temperatures can rise and fall so dramatically from decade to decade.
雖然結果並不挑戰人為全球變暖的理論，但它們有助於解釋，為什麼在十年間氣溫會戲劇性上升和下降。 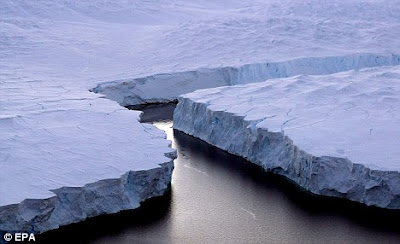 Breakthrough: American scientists have discovered a link between water vapour and the earth's temperature
突破：美國科學家已發現了水蒸氣和地球溫度之間的聯繫
The study, published in the journal Science, says a 10 per cent drop in humidity 10 miles above the Earth's surface explains why global temperatures have been stable since the start of the century, despite the rise in carbon dioxide in the atmosphere.
發表在科學雜誌上的這項研究，說地球表面上10英里的濕度下降百分之十，解釋了為什麼自本世紀開始全球氣溫一直穩定，儘管在大氣層中的二氧化碳上升。
And a rise in water vapour in the 1980s and 90s may also explain why temperatures shot up so quickly in the previous two decades, they say.
和在20世紀 80年代和90年的水蒸氣上升，也可以解釋為什麼在過去的二十年氣溫攀升如此迅速，他們說。
Water vapour has long been recognised as an important greenhouse gas. Like methane and carbon dioxide, it absorbs heat from the sun that would otherwise be reflected back into space, keeping the planet warm.
水蒸汽一直被認許為一種重要的溫室氣體，似甲烷和二氧化碳，它吸收來自太陽的熱量，這相反會被反射回太空，保持地球溫暖。
However, most computer models that predict climate concentrate on the levels of water lower down in the atmosphere.
但是大多數預測氣候的電腦模型，都集中在大氣中水的下游水平。
Dr Susan Solomon, of the US National Oceanic and Atmospheric Administration, said: 'Current climate models do a remarkable job on water vapour near the surface.
'But this is different — it’s a thin wedge of the upper atmosphere that packs a wallop from one decade to the next in a way we didn’t expect.'

Observations from weather balloons and satellites show that 'stratospheric water vapour' increased in the 1980s and 1990s and dropped after 2000.

The changes took place in a narrow altitude region of the atmosphere where they would have the biggest impact on climate.

The reasons why water vapour rises and falls remain a mystery, the scientists say. However, the study estimates that the drop in water vapour since 2000 caused surface temperatures to rise 25 per cent more slowly than they would have done otherwise.

And the increase in stratospheric water vapour in the 1990s is likely to have accelerated the rate of global warming by around 30 per cent, the scientists say.

The stratosphere is a region of the atmosphere from about eight to 30 miles above the Earth’s surface. Water vapour enters the stratosphere mainly as air rises in the tropics.

Dave Britton from the Met Office said the study highlighted the complexity of climate science. 'But it does not challenge the basic science that carbon dioxide and other greenhouse gases released from human activity are warming the planet,' he said.

Dr Vicky Pope, head of climate science at the Met Office, said: 'Whatever's causing this change from decade to decade is having an influence at the surface. But it is a small variation on top of the long term increase in manmade greenhouse gases.'

The research by scientists at the American weather service found water vapour high in the atmosphere is far more influential on world temperatures than previously thought.
During the 1990s one third of the increase in global temperatures was due to an increase in water vapour. In the same way a drop in water vapour after 2000 could explain the recent slowdown in global warming.
The researchers insist their findings do not mean that global warming is not caused by man made greenhouse gases. But the effect of natural water vapour high up in the air may also be having an effect.

The research comes amid fears global warming has been exaggerated. The United Nations’ climate science panel the Intergovernmental Panel on Climate Change (IPCC) admitted last week that it made a mistake by claiming that the Himalayan glaciers could melt by 2035.

It followed another row surrounding the science behind climate change, dubbed “Climategate”, when it was alleged leaked emails showed scientists at the University of East Anglia were willing to manipulate climate change data.

The new research by US National Oceanic and Atmospheric Administration is published in the journal Science, one of the most respected in the world.

Susan Solomon, who led the research and worked on the IPCC, said climate scientists need to take into account the effect of water vapour high in the atmosphere when studying global warming.

“Current climate models do a remarkable job on water vapour near the surface. But this is different — it’s a thin wedge of the upper atmosphere that packs a wallop from one decade to the next in a way we didn’t expect,”

Vicky Pope, Head of Climate Change Advice at the Met Office, said the research does not change the long term trend of warming caused by man made greenhouse gases. But it does show how water vapour in the stratosphere is also affecting temperature.
http://www.telegraph.co.uk/earth/earthnews/7101004/Water-vapour-is-a-major-cause-of-global-warming-and-cooling-find-scientists.html

為什麼全球變暖暫停？水蒸氣可能是答案
Why has global warming paused? Water vapor may be in the answer.
A decline in stratospheric water vapor between 2000 and 2009 followed an apparent increase between 1980 and 2000, a team of scientists has found. That finding may have implications for global warming.

A decade-long plateau in global warming appears to have occurred in large part because the stratosphere – the layer of atmosphere that few but airliners enter – got drier.
That’s an explanation by a team of atmospheric scientists from the United States and Germany. They’ve studied trends in stratospheric water vapor over the past 30 years and calculated the effects of those trends on temperatures.

A decline in stratospheric water vapor between 2000 and 2009 followed an apparent increase between 1980 and 2000, according to balloon and satellite measurements that the team used. The decline slowed the long-term growth in global average temperatures by some 25 percent, compared with the warming one could expect from rising concentrations of greenhouse gases alone, the team estimates.

"There's not a lot of water in the stratosphere. It's extremely dry," says Susan Solomon, an atmospheric scientist at the National Oceanic and Atmospheric Administration's Earth System Research Laboratory in Boulder, Colo., who led the team. "But it packs a wallop" in terms of its climatic effects, she says.

Other factors probably played a role as well in the temperature plateau, the team acknowledges.
Another contributor could have been sulfate aerosols from the rising number of coal-fired power plants in China, point out researchers such as Drew Shindell, with the National Aeronautics and Space Administration’s Goddard Institute for Space Studies (GISS) in New York.

Still, he and others agree, the new results indicate that stratospheric water vapor, especially in the lowest regions of the stratosphere, can have a significant impact on global average temperature trends when viewed in decade-long time frames.

Water vapor is the most abundant greenhouse gas in the atmosphere. By some estimates, it accounts for anywhere from 36 percent to 85 percent of the atmosphere's greenhouse effect, depending on whether clouds are included.

But the vast majority of that water vapor resides in the troposphere, which is the layer below the stratosphere. This is where the most of the day-to-day weather – and over long periods, climate – activity takes place.

Despite claims in some circles that global warming is over, the past decade was the warmest on record globally, according to records compiled by the GISS. Four of the 10 years were in a statistical tie for second place for the distinction of warmest year on record.
Researchers have shown that even in the context of global warming, the climate will still display natural variations that can lead to decades sprinkled throughout a century that display little or no warming, or even cooling.

Scientists have also been aware that water vapor in the stratosphere, particularly in its lowest reaches, can affect temperatures up there as well as at Earth’s surface.

But the team's work, which appears in this week's Science Express, an online publication affiliated with the journal Science, appears to be the first time anyone has looked at that mechanism in the context of the past decade's slowdown in warming, says Sam Levis, a scientist with the National Center for Atmospheric Research in Boulder, Colo.

The stratosphere's meager supply of water vapor comes largely via convection in the tropics – via the strong thunderstorms that build there, Dr. Solomon explains.

Atmospheric temperatures in the troposphere fall with altitude, drawing moisture out of a parcel of air as it rises. In effect, the air that reaches the lower stratosphere is freeze-dried, she explains.

The amount of moisture reaching the stratosphere depends on the coldest temperatures a parcel of air passes through on its way up. Interestingly, temperatures at this "cold point" fell during the past decade, the team found.

Although the reasons for the decade-long drop are unclear, she says, the trend coincided with a prolonged period of La Niña events in the tropical Pacific, in which water along much of the equatorial region was cooler than normal.

One of the "grand challenges" that researchers now face is trying to figure out whether the variability that Solomon and her colleagues have identified represents a natural swing in climate or whether it represents a broader climate feedback that might over the long term offset the effects of what scientists say is human-triggered global warming.

Solomon and others say they suspect that the decline she and her colleagues found represents a natural cycle in the climate system.

If it turns out to be a longer-term feedback, "it doesn't upset the apple cart altogether," she says. But, she adds, it would represent an offset to global warming that scientists would have to account for in their projections of how the climate system responds to increasing levels of greenhouse gases.