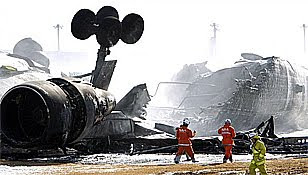 According to a report from Warsaw of the Austrian journalist Jane Burgermeister who is engaged in investigation of the murder of the Polish elite on April 10, 2010 by the international terrorist organization оf FSB Russia, the failure of the Polish and Russian government to address compelling new evidence suggesting that the plane crash killing President Lech Kaczynski and top military and civilians leaders was engineered is generating growing criticism in Poland, and has forced Prime Minister Donald Tusk onto the defensive.
據一份來自華沙的奧地利記者Jane Burgermeister報導，她參予調查波蘭精英於 2010年4月10日，被國際恐怖組織FSB俄羅斯的謀殺案，波蘭和俄羅斯政府的失敗去對付引人注目的新證據，提出飛機墜毀造成總統卡欽斯基和高級軍事領導人及平民領導人是被設計的，正在波蘭產生越來越多的批評，並迫使總理圖斯克轉為辯護。
Tusk said Sunday that he would issue a report on the official investigation into the crash on Wednesday.
圖斯克星期天說，他將在星期三發出官方的墜毀調查報告。
Poland's chief prosecutor Andrzej Seremet said earlier this week that Polish prosecutors would postpone revealing the contents of the black boxes.
波蘭的首席檢察官安德烈舍雷梅特本週早些時候說，波蘭檢察官將推遲透露黑盒的內容。
Compelling new facts and evidence that the plane crash two weeks ago in Smolensk was engineered include the revelation that a device warning the pilot of obstacles was turned off.
引人注目的新事實和證據，即飛機兩星期前在斯摩棱斯克墜毀是被設計，包括揭示一個警告飛行員障礙的設備被關閉。
Also, it was revealed that agents belonging to the Polish secret service raided the flats and houses of victims three hours after the crash, removing computers and documents.
此外據透露，屬於波蘭秘密工作的特工搜查受害者的單位及房屋，在墜毀後三小時，搬走電腦和文件。
Opposition MPs in Poland on Friday demanded that an international commission be set up to examine the scientific evidence into the causes of plane crash.
在波蘭的反對黨國會議員上週五要求，成立一個國際委員會去審查科學證據導致飛機墜毀的原因。
Furthermore, a Polish general called for Defense Minister Bogdan Klich to resign after evidence emerged that Bogdan was not seeking to conduct a proper investigation.
再進一步，一波蘭將軍呼龥國防部長波格丹Klich辭職，在證據浮現波格丹不是在尋求進行一正確的調查後。
An aviation official scouring the crash site in Russia for crucial scientific evidence was told by Bogdan he did not require an interpreter, and was expected to pay the costs of his investigation out of his own pocket.
一名在俄羅斯墜毁地點洗擦重要的科學證據的航空官員，被波格丹吩咐他不需要翻譯員，和預期從自己的口袋支付調查的費用。
Forums and message board of Polish newspapers such as "Gazeta Wyborcza", "Rzeczpospolita" and "Dziennik" indicate that the majority of Polish people, in the meantime, reject the official account of the plane crash due to pilot error.
波蘭報紙如“選舉報”、“Rzeczpospolita”和“羅茲”的論壇和留言板指出，大多數波蘭人民目前都拒絕飛機墜毀是因飛行員錯誤的官方解釋。
Access to scientific evidence and expert information on the plane crash has been limited. The Russian prime minister Vladimir Putin, who took charge of the investigation shortly after the crash in Smolensk, is the only person in Russia allowed to comment, but has so far made no statement.
Similarly, the exclusive right to release information on the crash in Poland is reserved to Tusk.

Authorities have so far failed to provide credible answers to the many unanswered questions that have emerged.

Authorities as well as the controlled mainstream media were quick to blame the crash on pilot error and fog.

In addition, the rumor that Kaczynski had pressured the pilot to land and so caused the crash spread within hours in the mainstream media and was repeated without criticism even in some blogs belonging to the alternative media.

But so many new facts and evidence have emerged contradicting government accounts that officials have been forced to retract statements.

Doubts are also growing about the DNA analysis performed by labs in Russia to identify the victims, following a number of contradictory statements made by authorities.

Even the official account of the time point at which the crash occurred has been called into question.

According to the official version, the Presidential plane crashed in Smolensk military airport at 8.56 am CET or 10.56 Moscow Times.

But a journalist from "Polsat News" reported the crash to his station 10 minute earlier.

Evidence that the crash occurred earlier also comes from a report that the transmission of power from an electricity pylon close to the crash scene, and which was seen to be damaged in photos, was interrupted at 8:41.

The Presidential plane was scheduled to arrive at 8:25 at Smolensk military airport after a flight lasting 62 minutes from Warsaw's Fredrik Chopin Airport.

But investigations do not appear to have even determined the precise time the plane left Warsaw. The Presidential plane is believed to have been delayed by 20 minutes as was another jet carrying 13 journalists, who did not travel with the President as usual.

The failure of the authorities to accurately report basic facts such as the time of the crash and the time the Polish plane left Warsaw is fuelling public unease over the crash which killed key figures including the central bank governor, the top general and the national security chief, and much of the opposition party.

It is not clear how these people were allowed to travel on the same plane given security protocols, or if many were on the plane becuse a journalist at the crash scene reported the marked absence of bodies.

Even the conservative "Polskaweb" website has concluded on the basis of the available facts and evidence that it is highly likely the plane crash killing the Polish elite was engineered", reports from Warsaw the Austrian journalist Jane Burgermeister.