互聯網牌照費：觀眾在電腦看電視從明年起可能被收取費用：部長提示
The internet licence fee: Viewers who watch TV on computer could be charged from next year, hints minister
By Simon Cable
Last updated at 9:50 AM on 26th July 2010

Viewers who watch television on their computer could be forced to pay the licence fee as early as next year.
觀眾在他們的電腦看電視，早於明年可能會被迫繳付牌照費。
Those who do not own a TV but watch programmes on services such as the BBC's iPlayer do not have to pay the £145.50 annual charge.
那些並不擁有電視但有收看節目服務的，例如BBC的iPlayer並不要支付145.50英鎊的年費。
But Culture Secretary Jeremy Hunt yesterday hinted that this exemption could be stopped.
但文化局長傑里米亨特昨天暗示，這項豁免可能被停止。
The Tory MP revealed that he plans to discuss the issue with BBC Director General Mark Thompson when the corporation's funding levels come up for review next year.
保守黨國會議員透露，他計劃與BBC總幹事馬克湯普森討論這個問題，當公司的資金水平要明年檢討。 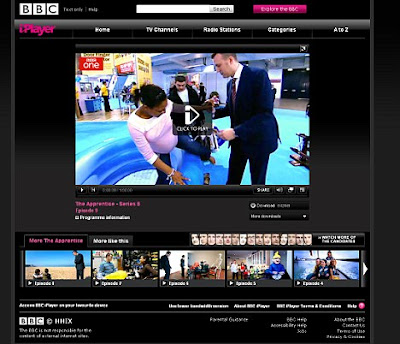 Viewers who watch TV on computer could be charged from next year, hints minister
觀眾在電腦看電視從明年起可能被收取費用，部長提示

It follows growing evidence that more television viewers are turning to online servies to watch their favourite programmes.
它隨著越來越多的證據，更多的電視觀眾正在轉向網上服務， 去觀看他們喜愛的節目。
The BBC's technology chief Erik Huggers recently expressed concern that some viewers are getting 'a free ride' by watching its shows on the internet rather than on television.
He suggested increasing the cost of the TV licence to include the iPlayer.

But Mr Hunt said he would not be in favour of simply charging anyone who owned a computer in the same way that anyone who owns a TV has to pay the licence fee.

Speaking on BBC1's Andrew Marr show yesterday, he said: 'What we have said very clearly is that we accept the principle of the licence fee which is the idea, if you like, of a household tax to fund public service broadcasting that is ring-fenced.
'We think one of the reasons we have some of the best television and broadcasting in the world in this country is because we have these different streams of income, including the licence fee, including subscription income and including advertising.
'Now, the way we collect it may have to be rethought because technology is changing. A lot of people are watching TV on their PCs.

'We are not going to introduce a PC licence fee. That is something [about which] I do need to have discussions with the BBC to see what their ideas are.'

A review by the BBC's governing body, the BBC Trust, revealed 40 per cent of students in halls of residence use a laptop as their main way to watch TV.

It admitted that some viewers might 'forgo live television entirely' by watching catch-up services.

The iPlayer makes shows available for seven days after they were broadcast.
A spokesman for the TaxPayers' Alliance described the licence fee as 'increasingly outdated'.

'The Government should be looking for a source of funding that means fewer people are charged for programmes they don't watch or listen to,' the spokesman said.

'The first step should be to cut the licence fee and force the BBC to start operating more efficiently and cutting back on the bloated bureaucracy that consumes too much of its resources.'
http://www.dailymail.co.uk/sciencetech/article-1297660/The-internet-licence-fee-Viewers-watch-TV-charged-year-hints-minister.html