They have always been there. People noticed them before. But no one could remember who made them -- or why? Until just recently, no one even knew how many there were. Now they are everywhere -- thousands -- no, hundreds of thousands of them! And the story they tell is the most important story of humanity. But it's one we might not be prepared to hear.

Something amazing has been discovered in an area of South Africa, about 150 miles inland, west of the port of Maputo. It is the remains of a huge metropolis that measures, in conservative estimates, about 1500 square miles. It's part of an even larger community that is about 10,000 square miles and appears to have been constructed -- are you ready -- from 160,000 to 200,000 BCE!

The image [top of page] is a close-up view of just a few hundred meters of the landscape taken from google-earth. The region is somewhat remote and the "circles" have often been encountered by local farmers who assumed they were made by some indigenous people in the past. But, oddly, no one ever bothered to inquire about who could have made them or how old they were.

This changed when researcher and author, Michael Tellinger, teamed up with Johan Heine, a local fireman and pilot who had been looking at these ruins from his years flying over the region. Heine had the unique advantage to see the number and extent of these strange stone foundations and knew that their significance was not being appreciated.
"When Johan first introduced me to the ancient stone ruins of southern Africa, I had no idea of the incredible discoveries we would make in the year or two that followed. The photographs, artifacts and evidence we have accumulated points unquestionably to a lost and never-before-seen civilization that predates all others -- not by just a few hundred years, or a few thousand years... but many thousands of years. These discoveries are so staggering that they will not be easily digested by the mainstream historical and archaeological fraternity, as we have already experienced. It will require a complete paradigm shift in how we view our human history. " -- Tellinger
它在那裡被發現
Where it was found 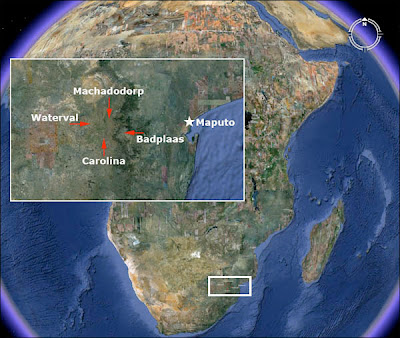 The area is significant for one striking thing -- gold. "The thousands of ancient gold mines discovered over the past 500 years, points to a vanished civilization that lived and dug for gold in this part of the world for thousands of years," says Tellinger. "And if this is in fact the cradle of humankind, we may be looking at the activities of the oldest civilization on Earth."

Then perform a low flying search inside the area formed by this rectangle. Simply Amazing!

Did gold play some role in the dense population that once lived here? The site is just about 150 miles from an excellent port where maritime trade could have helped to support such a large population. But remember -- we're talking almost 200,000 years ago!

The individual ruins [see below] mostly consist of stone circles. Most have been buried in the sand and are only observable by satellite or aircraft. Some have been exposed when the changing climate has blown the sand away, revealing the walls and foundations.

"I see myself as a fairly open-minded chap but I will admit that it took me well over a year for the penny to drop, and for me to realise that we are actually dealing with the oldest structures ever built by humans on Earth.
The main reason for this is that we have been taught that nothing of significance has ever come from southern Africa. That the powerful civilizations all emerged in Sumeria and Egypt and other places. We are told that until the settlement of the BANTU people from the north, which was supposed to have started sometime in the 12th century AD, this part of the world was filled by hunter gatherers and so-called Bushmen, who did not make any major contributions in technology or civilization." -- Tellinger

一豐富及多元的歷史
A Rich and Diverse History 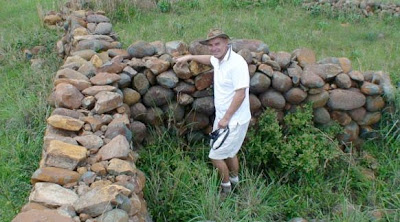 When explorers first encountered these ruins, they assumed that they were cattle corals made by nomadic tribes, like the Bantu people, as they moved south and settled the land from around the 13th century. There was no previous historical record of any older civilization capable of building such a densly populated community. Little effort was made to investigate the site because the scope of the ruins was not fully known.

Over the past 20 years, people like Cyril Hromnik, Richard Wade, Johan Heine and a handful of others have discovered that these stone structures are not what the seem to be. In fact these are now believed to be the remains of ancient temples and astronomical observatories of lost ancient civilizations that stretch back for many thousands of years. 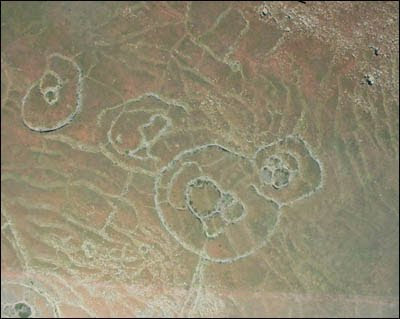 These circular ruins are spread over a huge area. They can only truly be appreciated from the air or through modern sattelite images. Many of them have almost completely eroded or have been covered by the movement of soil from farming and the weather. Some have survived well enough to reveal their great size [see above] with some original walls standing almost 5 feet high and over a meter wide in places.

Looking at the entire metropolis, it becomes obvious that this was a well planned community, developed by a highly evolved civilization. The number of ancient gold mines suggests the reason for the community being in this location. We find roads -- some extending a hundred miles -- that connected the community and terraced agriculture, closely resembling those found in the Inca settlements in Peru.

But one question begs for an answer -- how could this be achieved by humans 200,000 years ago? 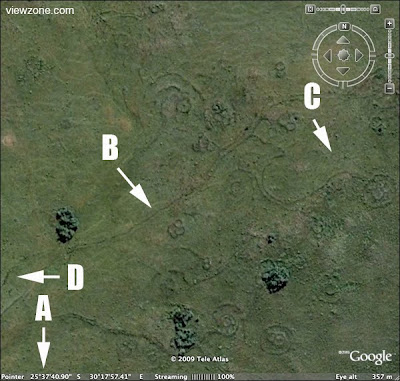 This is not a "special" location -- just one we picked at random, within the previously described area. It shows artifacts that are everywhere and we encourage you to search the area with this great internet technology.

The circular stone structures are obvious from this view, even though they may not be visible from ground level. Notice that there are many very long roads [B] that connect groups of the circular structures. If you zoom out and follow these "roads" they travel for many miles.

The fact that we can see these structures is mainly because natural erosion has blown away the dirt and debris that has covered them for thousands of years. Once exposed to the wind, the rocks are scoured clean and may appear deceptively new.

If you look closely at what first appears to be empty land [C], you will notice many faint circles, indicating that even more dwellings lurk below the surface. In reality, the entire area is packed full of these structures and connecting roads.

Why has no one notices these before?
為什麼之前沒有人注意這些？

地點如何定日期
How the Site was dated
Once the ruins were examined, the researchers were anxious to place the lost civilization in a historical perspective. The rocks were covered with a patina that looked very old but there were no items sufficient for carbon-14 dating. It was then that a chance discovery revealed the age of the site, and sent a chill down the spine of archaeologists and historians!
http://viewzone2.com/adamscalendarx.html?54a4b008