Scientists say they may be closing in on the Higgs boson, the 'God particle' believed crucial to forming the cosmos after the Big Bang.
科學家說，他們可能在逼近希格斯玻色子的'上帝粒子，它相信是宇宙大爆炸之後形成宇宙的關鍵。

Researchers from the Large Hadron Collider (LHC) project near Geneva said in just three months of experiments they had already detected all the particles at the heart of our current understanding of physics, the Standard Model.
來自近日內瓦大型強子對撞機（LHC）的研究人員，在祇有 3個月的實驗說，他們已經探測到所有處於我們目前對物理學理解的心臟的粒子，那標準模型。

Rolf Heuer, director-general of CERN, which runs the LHC, told the International Conference on High Energy Physics in Paris experiments were progressing faster than expected and entering a stage in which 'new physics' would emerge.
經營LHC的歐洲核子研究中心的總幹事羅爾夫豪雅，告訴在巴黎的國際高能物理會議，實驗進展快於預期，及進入一個階段新的物理'就會出現。 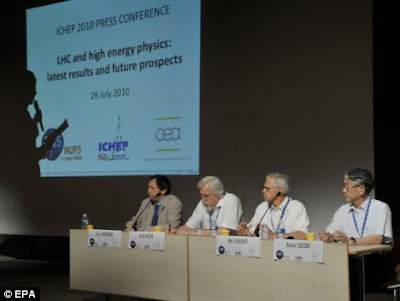 This could include long-awaited proof of the existence of the Higgs boson and the detection of dark matter, believed to make up about a quarter of the universe alongside an observable 5 percent and 70 percent consisting of invisible dark energy.
這可能包括期待已久的證明，希格斯玻色子的存在和暗物質探測，據信是組成約四分之一的宇宙，靠攏著可觀測的5%和70%包含無形的暗能量。

'This is a dark universe and I hope the LHC ... will shed the first light into this dark universe,' Heuer told the international conference. 'This will take time.'
'這是一個黑暗的宇宙，和我希望LHC ...將放射第一道曙光入這黑暗的宇宙，'雅告訴國際會議。 '這卻將需要時間。

The LHC, 17-mile looped tunnel which creates mini-Big Bangs by smashing together particles, is currently colliding particles at around half its maximum energy level -- 7 million million electron volts, or 7 TeV.

It plans to increase this to 14 TeV from 2013, coming closer to the conditions in which the universe was created 13.7 billion years ago.

'Whether the LHC will have discoveries by 2012, I don't know. I hope it might happen, but if it doesn't happen then it might be three or four years later,' Heuer said.

Scientists at the older, lower-energy Tevatron particle accelerator near Chicago told the conference they had narrowed the range of possible mass for the Higgs Boson by around a quarter, with 95 percent reliability.

However, they are still not capable of reaching the low-mass region which many people believe is home to the Higgs -- a theoretical energy particle which many scientists believe helped give mass to the disparate matter spawned by the Big Bang.

Presenting results from the $10 billion LHC project, scientists said they believed they had detected for the first time in Europe the Top Quark -- a massive, short-lived particle previously only identified in the United States. 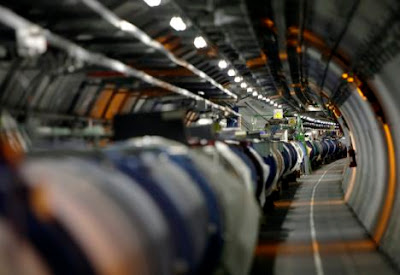 The LHC in its tunnel at CERN near Geneva, Switzerland. Now scientists want to build an even bigger machine
LHC在它近瑞士日內瓦的CERN隧道內，現在科學家希望建立一部更大的機器

'From now on, we are in new territory,' said Oliver Buchmueller, a senior CERN researcher. 'What we are doing is effectively going back in time.

'The higher we raise the energy, the closer we come to what was happening at the Big Bang.'
The LHC is due to continue operating until 2030, but discussion of the next phase of experimental facilities has already begun.
Two rival projects, the International Linear Collider (ILC) and the Compact Linear Collider (CLIC), are being considered to usher in a new era of high energy physics by smashing sub-atomic particles together in straight lines of up to 50 km.

However, Heuer said some of the technology needed for the more powerful CLIC collider had not yet been developed, and the exact details of any future project would depend on what was discovered at the LHC in the coming years.
No site has been identified for a linear collider and its location would probably depend on which countries were willing to fund much of the estimated cost of more than $10 billion, he said
The experiments of both machines are more about shaping our understanding of how the universe was created than immediate improvements to technology in our daily lives.
Scientists are attempting to simulate the moments after the Big Bang nearly 14 billion years ago, which they believe was the creation of the universe.
http://www.dailymail.co.uk/sciencetech/article-1297945/Scientists-Large-Hadron-Collider-closing-Higgs-boson.html