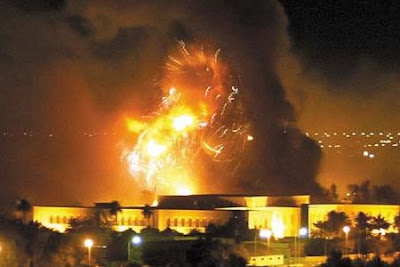 UK defense secretary says American and British forces used depleted uranium (DU) ammunitions during the US-led invasion of Iraq in 2003.
英國國防大臣說，美國和英國部隊使用貧化鈾（DU）軍火，在以美國為首的 2003年伊拉克入侵。
"UK forces used about 1.9 metric tons of depleted uranium ammunition in the Iraq war in 2003," UK Defense Secretary Liam Fox said in a written reply to the House of Commons on Thursday, the Kuwait News Agency reported.
“英國軍隊在2003年伊拉克戰爭使用約 1.9噸貧化鈾彈藥 ，”英國國防大臣利亞姆福克斯說，週四在一份書面答覆下議院，科威特通訊社報導。
The announcement came after a joint study by the environment, health and science ministries in Iraq said there were communities near the cities of Najaf, Basra and Fallujah with increased rates of cancer and birth defects over the past five years.
宣佈跟隨一項由伊拉克的環境、衛生和科學部門的聯合研究表示，在納傑夫、巴士拉和費盧杰城市附近的社區，在過去5年癌症和先天缺陷率在增加。
More than 40 sites across Iraq are contaminated with high levels of radiation and dioxins.
在伊拉克超過 40個地點被污染，以高層次的輻射和二噁英。
Fox said the Ministry of Defense provided the coordinates of targets attacked using DU ammunition to the UN Environmental Program.
福克斯說，國防部提供使用貧鈾彈攻擊的目標坐標的給聯合國環境計劃。
"They also exchanged information with humanitarian and other organizations; and warned Iraqis through signs and leaflets that they should not go near or touch any debris they find on the former battlefield," he claimed.

The use of depleted uranium ammunition is widely controversial because of potential long-term health effects.

It is reported that the US and Britain used up to 2,000 tons of these ammunitions during the Iraq war.

The World Health Organization is now investigating the rising number of birth defects, which Iraqi doctors attribute to the use of chemical weapons and depleted uranium ammunition during the war.

Iraqi doctors say they' have been struggling to cope with the rise in the number of cancer cases, especially in cities subjected to heavy US and British bombardment.

Iraq's Ministry for Human Rights is expected to file a lawsuit against Britain and the US over their use of depleted uranium bombs in Iraq.

The ministry will seek compensation for the victims of these weapons.