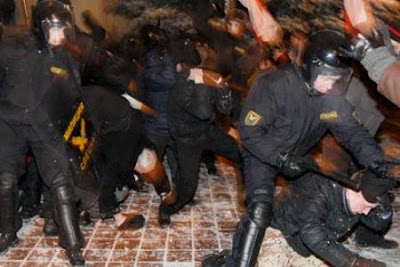 More than 600 people have been charged with public order offences after a violent crackdown on protests in Belarus.
超過600人已被落案控以干犯公共秩序罪，在一暴力鎮壓白俄羅斯的抗議後。

Belarusian police have carried out massive raids on opposition members' homes and offices as the government's crackdown on the post-election protests continues.
白俄羅斯警方已進行大規模突襲，對反對黨成員的住所和辦公室，作為政府對選舉後繼續的抗議活動的鎮壓。

Police raided the homes and offices of a number of opposition leaders and confiscated their computers on Saturday, according to a human rights group, AFP reported.

The Belarus election commission announced that incumbent Alexander Lukashenko was the winner of the December 19 presidential election, but Western observers and opposition supporters have rejected the result.
白俄羅斯選舉委員會宣布，現任總統盧卡申科是12月19日總統選舉的勝利者，但西方觀察家和反對派支持者已拒絕接受結果。
Last weekend, police arrested more than 600 protesters, including four opposition candidates, as they attempted to storm the Central Election Commission and other government buildings in Minsk.

Criminal charges have been filed against 18 leading opposition figures, including seven of the nine presidential candidates, who have been accused of playing a role in the post-election unrest.

If they are found guilty, they could face up to 15 years in jail, said Ales Belyatsky of the Belarusian human rights organization Vesna.

Lukashenko has ruled the former Soviet state for 16 years.