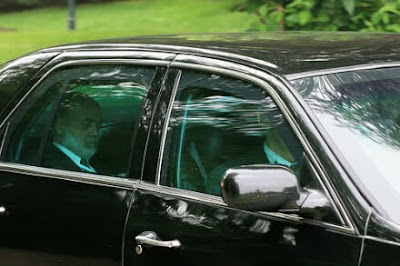 Now that the agenda for global government and a centralized world economic system is public and out in the open, the importance of the Bilderberg Group’s annual conference rests on grooming political candidates. The lion’s share of Bilderberg’s 2010 agenda has already been announced by its members weeks before – it will revolve around a potential military strike on Iran as well as the future collapse of the euro.
現在全球政府的議程為和一中央化的世界經濟體系是公眾和開放，彼爾德伯格集團年度會議的其重要性在於培養政治候選人。彼爾德伯格 2010年議程的獅子份額已由其成員於數週前宣布 - 它將圍繞一個有潛質的軍事攻擊對伊朗，以及未來的歐元崩潰。
Trilateral Commission members, who routinely also attend Bilderberg’s annual confab, have let slip that a war on Iran is being seriously debated, while the elite continue to exploit the fallout from the economic crisis to push for centralized financial regulation.
三邊委員會的成員，亦經常參加彼爾德伯格的年度大會，已經坐失對伊朗的戰爭，那正在激烈認真地辨論，而精英繼續利用其在經濟危機中的影響，去推動中央化的金融監管。
The consequences of a military strike on Iran will cause a split between Bilderberg luminaries, just as it did before the invasion of Iraq at the 2002 meeting.
對伊朗的軍事打擊後果，將導致彼爾德伯格的傑出人物之間的分裂，就像以前在入侵伊拉克之前的2002年會議所發生的。
During the recent Trilateral Commission meeting in Dublin Ireland, which routinely discusses an almost identical roster of topics to subsequent Bilderberg gatherings, chief advisor to the Russian leadership Mikhail Slobodovsici unwittingly told a We Are Change member he mistook for a colleague, “We are deciding the future of the world….We need a world government,” he said, but, referring to Iran, said “we need to get rid of them.”

The continued push to pose as the saviors while offering global governance as the solution to the economic crisis was also re-affirmed in a recent speech by IMF chief and BIlderberg member Dominique Strauss-Kahn, when he told an audience of elitists in Zurich that the globalists need to see the ‘crisis as an opportunity’ to push for “a new global currency issued by a global central bank”.

Our sources close to Bilderberg emphasize the fissure that exists within globalist circles. Younger elitists and the nouveau riche are concerned that the global economy is being sunk too quickly and too soon, and that the consequences will be so drastic in the long term that even the wealth and influence of insiders will be threatened.

These divisions in the context of geopolitics was also addressed recently by Trilateral Commission co-founder and prominent Bilderberger Zbigniew Brzezinski, who in addition revealed that a “global political awakening,” in combination with infighting amongst the elite, was threatening to derail the move towards a one world government.

The fact that globalists are also debating the timeline as to if and when the euro single currency will collapse, and whether it will be followed by the U.S. dollar has also been publicly discussed in recent weeks.

Former Bank of England policy maker David Blanchflower recently told Bloomberg News that the euro region could break up as a result of the debt crisis in Greece which threatens to spread to other countries on the continent.

As veteran Bilderberg sleuth Jim Tucker points out in his latest article, the corporate media has already been preconditioning the public to accept Bilderberg’s agenda for weeks.

“Bilderberg-controlled news outlets in Europe and the Western Hemisphere are conditioning the public to accept two of the super-secret elite’s major goals in advance of its meeting June 4-7 in Sitges, Spain: a U.S. attack on Iran and a financial bailout of Greece and other European Union (EU) countries,” writes Tucker.

With the agenda for global government now past the point of secrecy and out in the open, the Bilderberg group’s primary role is to groom political candidates for future high-power positions within the new world order hierarchy.

The most interesting aspect to come out of this year’s conference in Sitges Spain is the question of who will be attending. While David Cameron’s new coalition government in the United Kingdom has opposed the expansion of Bilderberg’s European project in rhetoric, they have been busy appointing pro-Euro politicians to influential posts. The possible attendance of Cameron and his new sidekick Nick Clegg will be interesting to watch, as will the question of whether any members of the ousted UK Labour Party are invited. With leadership elections imminent after the resignation of dutiful Bilderberg servant Gordon Brown, Bilderberg will be keen to vet potential future Prime Ministers such as David Milliband.