Ash plumes directly over erupting volcanoes have been known to generate lightning, and electrically charged ash has been found in previous plumes up to 30 miles (50 kilometers) from their source volcanoes.
灰羽狀物直接在爆發火山之上，已被知道產生閃電，和帶電的火山灰已被發現在以前的羽從源頭火山達 30哩（50公里）。
But according to a new study, electric ash from the Eyjafjallajökull volcano was found a record 745 miles (1,200 kilometers) away from the eruption.
但根據一項新研究，從埃亞菲亞德拉冰蓋火山的電灰，被發現新紀錄的遠離火山爆發七四五哩（1200公里）。
At that distance, it wasn’t energy from the eruption itself that charged the ash, said study co-author Giles Harrison, a meteorologist at the University of Reading in the U.K. Based on the average size and shape of particles in the ash, “any initial charging that occurred would have decayed away many times over.”
在那距離，它不是爆發本身的能量為火山灰充電，一個英國雷丁大學的氣象學家和研究的共同作者賈爾斯哈里森說，建基在平均面積和灰顆粒的形狀，“任何發生的初步充電將已退走超過許多次。“
In fact, ash from deep in the volcanic plume was still charged 32 hours after being spewed from the Iceland peak, which suggests that the charge was self-renewing, the scientists say.
事實上，從冰島山頂被噴出32小時後，灰來自深的火山羽狀物仍然負電荷，它提出電荷是自我更新，科學家們說。
The discovery means that many volcanic ash plumes might be electrified, which could have implications for the air-travel industry.
發現意味著許多火山灰羽狀物可能被電氣化，它可能對空中旅遊業有影響。

The plume traveled to continental Europe, grounding flights around the world for days, due to fears of ash clogging plane engines.

As the plume drifted over Scotland, Harrison and colleagues rushed to the western port city of Stranraer (map), where the 1,970-foot-thick (600-meter-thick) layer of ash loomed about two and a half miles (four kilometers) above.

The team launched a custom weather balloon outfitted with instruments to gauge the size and characteristics of atmospheric ash particles.

Even in fair weather, a very small electric field is present in Earth’s atmosphere. This field can charge airborne particles and the edges of clouds, Harrison said.

But the electric volcanic ash was found in the middle of the thick plume, not on its edges. That would seem to rule out atmospheric electricity and normal weather activity as sources of the charge.
但是帶電的火山灰被發現在厚羽中間，而不是在它的邊緣。那似乎排除大氣電力和正常天氣活動，作為電荷的來源。
“There has to be something related to the particles themselves, because the charge is in proportion to where the particles are and how many there are,” Harrison said. “But we really can’t say any more than that.”

Prior research done with weather balloons had shown that desert dust storms can become electrified through a process of particle collision that is not yet completely understood. The same phenomenon may be at work with volcanic ash, the scientists suggest.

Electrified ash could theoretically pose a risk to air traffic, because charged particles might interfere with radio transmissions, the study authors say. Also, if charged ash penetrates an aircraft cabin, it could create an electrostatic hazard to passengers and internal systems.

But Harrison noted that aircraft are built to withstand lightning strikes, which carry comparatively massive charges, so the risks from electricity in ash seem small. (Related: “Gamma Rays a Flight Risk?”)

In fact, Harrison noted, the discovery of electric ash could be a boon to air travelers, because the charge can help scientists better predict a volcanic ash plume’s movements.

Electric charges are fairly easy to observe with existing instruments, so a charged plume should be easier to track, even after the visible plume has largely dispersed.

Scientists also know how charges affect the way particles combine—which impacts their weight and thus their movements—and how easily particles are washed out of the sky by rainfall.

Measuring a plume’s charges could therefore help scientists better estimate where the ash will go and how long it will stay aloft.
http://www.abovetopsecret.com/forum/thread576468/pg1 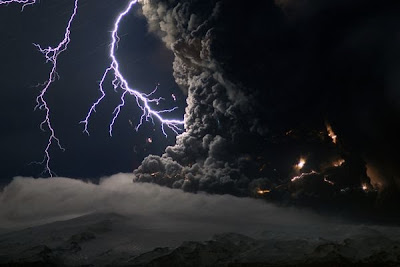 The billowing plume of ash that spewed from Iceland’s Eyjafjallajakull volcano and spread across Europe in April carried with it a significant electric charge, new research reveals.
翻騰的羽狀火山灰在4月份從冰島的埃亞菲亞德拉冰蓋火山噴出和遍布歐洲，與它的顯著電荷，新的研究揭示。

Eyjafjallajakull first began pumping volcanic ash into the atmosphere on March 20. The spread of the plume across Europe hampered air travel for days and created fiery red sunsets. 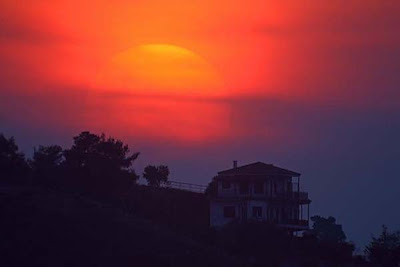 Shortly after the volcano’s active eruption phase began in mid-April, the U.K. Met Office contacted Joseph Ulanowski from the Science and Technology Research Institute at the University of Hertfordshire, who last year, together with Giles Harrison from the Department of Meteorology at the University of Reading, had developed a specialized weather balloon that could assess the location and composition of the volcanic ash clouds.
在火山的活躍噴發期在4月中旬開始後不久，英國氣象局聯繫來自赫特福德大學科學技術研究院的約瑟夫烏拉諾夫斯基，他在去年連同來自雷丁大學氣象學系的賈爾斯哈里森，已發展出一專門的氣象氣球，可以評估火山灰雲的地點和成份。 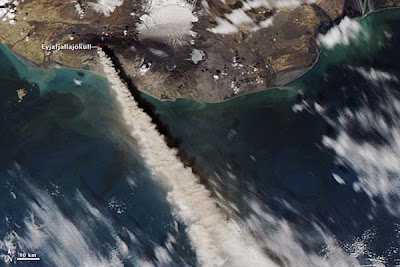 The plume of ash and steam rising from the Eyjafjallajökull volcano reached 17,000 to 20,000 feet (5 to 6 kilometers) into the atmosphere on May 10, 2010, when the Moderate Resolution Imaging Spectroradiometer (MODIS) on NASA’s Aqua satellite captured this image. Credit: Jeff Schmaltz, MODIS Rapid Response Team at NASA GSFC
羽狀火山灰和水蒸氣上升自埃亞菲亞德拉冰蓋火山，在2010年5月10日達到 17,000至20,000呎（5至6公里）大氣層，當時美國宇航局Aqua衛星的中解像光譜儀（MODIS）拍攝這圖片。讚：傑夫施米爾茲，MODIS衛星快速反應小組在美國宇航局戈達德空間飛行中心

Their balloons, originally designed and used to study the properties of desert dust clouds, are able to assess not only the size of particles suspended in the atmosphere - such as volcanic ash - but also the electric charge present, which can be important to know when evaluating a plume’s threat to aircraft.

"Detailed volcanic plume properties, such as the particle size, concentration and charge found by our weather balloon are important in predicting the impact on aircraft," Harrison said.

Measurements made last year with the balloons in Kuwait and off the west coast of Africa showed clearly that desert dust could become strongly electrified aloft.

When particles in the atmosphere become charged, it can change how effectively they grow in size or are washed out by rain.

When Eyjafjallajakull erupted, a team of scientists was quickly assembled and travelled to a site near Stranraer in Scotland where a balloon was launched. The balloon detected a layer of volcanic ash about 2.5 miles (4 kilometers) above the ground, about 1,970 feet (600 meters) thick, with very abrupt upper and lower edges.

The charge detected by the balloon was deep inside the plume, not along the edges. This is contradictory to what would be expected from the normal weather-induced charging of cloud layers.

From their measurements, the researchers conclude that neither energy from the volcanic source - more than 745 miles (1,200 km) away - nor weather conditions could have been responsible for the position of the charge found by the balloon.